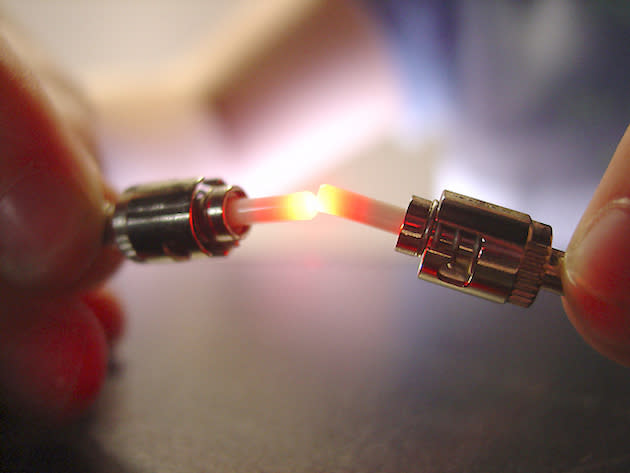 Everyone in the UK wants super-fast broadband in their home. The most reliable and effective solution right now is fibre, which every internet provider uses as the backbone for their network nationwide. But there's a problem -- the fibre often stops at the street cabinet, and many customers are limited by the slower copper cables running up their driveways. While fibre can be installed for the final leg, it's expensive, so companies such as BT are looking for new ways to give their traditional copper a speed boost. One approach is "G.fast," a technology that uses a wider frequency band to increase performance. It works best over shorter distances, although rural homes can still be supported via remote nodes and distribution points, which bring the fibre connection closer to the property.

BT has been trialling this method for some time in its research labs, but today the company announced it'll soon be ready for the mass market. Two pilots are set to kick off in Huntingdon (Cambridgeshire) and Gosforth (Newcastle) this summer, connecting roughly 4,000 homes and businesses. So what can locals expect? Faster speeds, but nothing unprecedented. BT is promising "a few hundred megabits per second" to begin with, which sounds roughly the same as its 330 Mbps fibre-to-the-property (FTTP) connections. However, the firm says it'll be increased to 500 Mbps over time, and expects to deliver these speeds to most of the UK within the next decade. Any improvements will, of course, be welcomed by the British public, but it's hard not to see G.fast as a stop-gap measure. It might improve copper cables in the short-term, but it doesn't solve the long-term need for full-blown fibre broadband connections. Notably, BT has also promised "premium" fibre services of up to 1Gbps, but that's likely to come from FTTP installations, not G.fast.

In this article: broadband, BroadbandAccess, BT, copper, fibre, fibre optic, gfast
All products recommended by Engadget are selected by our editorial team, independent of our parent company. Some of our stories include affiliate links. If you buy something through one of these links, we may earn an affiliate commission.