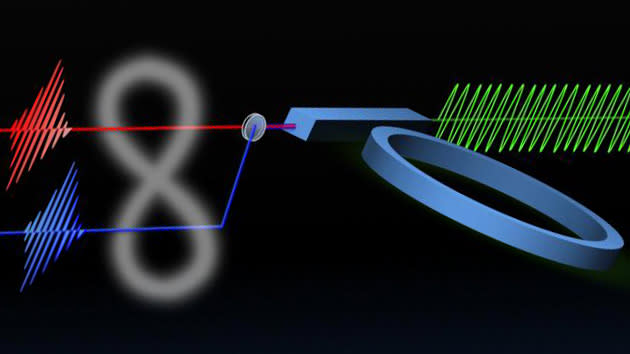 Photon entanglement is one of the odder properties of quantum physics, but it promises a lot for computing -- if one photon can instantly affect another no matter how far away it is, you could make super-speedy computers and communications that aren't easily limited by physical distances. It hasn't been easy to get entanglement tech down to a manageable size, however, and that's where Italy's Università degli Studi di Pavia might just come to the rescue. Its researchers have developed a tiny emitter that could pump out entangled photons as part of an otherwise ordinary silicon chip. The device, which uses a ring shape to both rope in and emit light, measures just 20 microns across. That's hundreds of times smaller than existing devices, which are comparatively gigantic at a few millimeters wide.

You probably won't see whole processors built around this technique, at least not for a while. Chip makers usually work on the nanometer scale -- Intel's new 14nm processors are far more intricate than this ring. Moreover, there's some refinement left to make sure this part produces a reliable stream of tangled photons. If everything falls into place, however, you could see entanglement rings boosting performance in certain tasks. You might also see an entanglement-based component that handles jobs which aren't otherwise possible, like spy-proof quantum cryptography. This breakthrough isn't going to change semiconductors overnight, but it could make quantum computing more of a practical reality.

In this article: cryptography, entanglement, opticalcomputing, photon, photonics, quantumcomputing, quantumcryptography, QuantumEntanglement, QuantumPhysics, science, silicon
All products recommended by Engadget are selected by our editorial team, independent of our parent company. Some of our stories include affiliate links. If you buy something through one of these links, we may earn an affiliate commission.