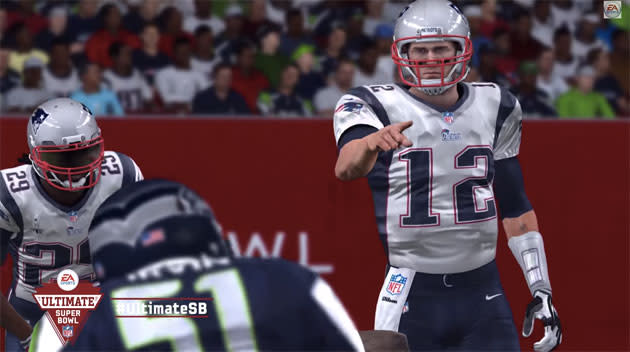 Pundits schmundits. Give us a console and an annually rehashed sports game series and we'll do the rest. Possibly. EA's Super Bowl simulation, which ran on Madden 15 last week, pegged the New England Patriots to win, coming from behind to clinch it 28-24 against the Seattle Seahawks. Which is exactly what happened in real life last night, with the Patriots trailing in same third quarter. While this year's prediction might be particularly uncanny, Madden has now picked the winner in eight out of the last 10 Super Bowls. However, some may still prefer the shock and awe of Breaking Madden in comparison to more straight-laced sims.

In this article: breakingmadden, football, madden, madden15, NFL, patriots, seahawks, simulation, simulator, superbowl
All products recommended by Engadget are selected by our editorial team, independent of our parent company. Some of our stories include affiliate links. If you buy something through one of these links, we may earn an affiliate commission.