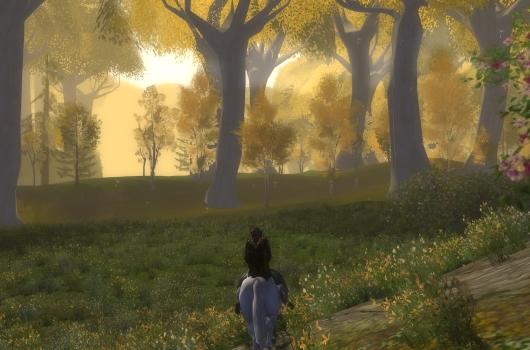 A little under five years ago, I answered the call for a wonderful opportunity to write at Massively. In many ways, it was an unbelievable dream come true. It married my passion for MMOs with my love of blogging while taking all of that to the next level. The first night after I got hired, I set my phone to deliver team emails ASAP so that I wouldn't miss out on a moment (I quickly turned that off so I could actually sleep). Since then, it's been a rollercoaster of wild news, personal projects, out-of-state conventions, long discussions, and general excitement over what the next day will bring.

And now it's over.

Oh, the MMOs are still going strong and 2015 is shaping up to be one mighty interesting year. Personally, I'll keep writing about these games on Bio Break and talking about them (we're taking the Massively Speaking podcast with us as a last-minute gesture of defiance against our former corporate overlords). Past that, I don't know what the future will hold. I guess I have to be content with not knowing. But before I bow out of the site completely, I have a few things to say to you all. Knowing that our readers valued the site as a place to go for news, opinions, and discussion made this place a joy to wake up every morning and write. We tried incredibly hard -- so hard, guys -- to hold to a higher standard of journalistic integrity and conduct, and I believe that that was rewarded with fans who flocked here in appreciation of that.

There's something magical about knowing that everything you write is going to be read by thousands if not tens of thousands of people. It's an ego boost, to be sure, but it also made me hold myself to a higher standard. I wanted to inform, entertain, and even amuse, and I hope I've done that for you.

Thanks also to the hard-working developers and CMs who strive each and every day to get awesome games to us and keep them running. We have sometimes had an antagonistic relationship, but under that was a current of mutual affection and shared love of MMOs. You guys and gals rock. The real goodbyes began over a year ago, to be honest. I've not only had to say farewell to former staffers like Rubi, Liz, Krystalle, Richie, and Sera who went on to make a big name for themselves in the industry, but to a good chunk of the team that got laid off due to the AOL budget cuts last year. And now I have to say goodbye to everyone else, at least in terms of working with them on a daily basis.

Massively was an incredible work family. We never always agreed with each other, but we appreciated, respected, and cared for each other so much. We were each other's biggest supporters. I have always been in awe of being part of Massively because I got to rub shoulders with such terrific writers who always put up pieces and perspectives that made me try even harder due to their quality.

Bree's been the best editor-in-chief that anyone could ask for. She's been infinitely patient (especially with how I could never place "only" right in a sentence) and encouraging to the team and has helped transform us into better writers through coaching and grammar seminars. She inspired us all to do our very best and was a snarky podcast co-host to boot.

Jef is so hard-working and does so without ever complaining about the work (now about games, that's another story altogether), and he and Bree handled the editing responsibilities capitally this past year. I'll really miss his laconic attitude and his eternal search for a great sandbox.

Eliot has passion and gaming experience that shows in his pieces, and he's never been afraid to speak his mind, even on controversial topics. Larry is not only a terrific guy, but he's wowed me with his writing, vlogging, and graphics skills. MJ is simply one of the most enthusiastic gamers in the world, and her unabashed love for all things MMO was a treat to witness (as were her streams). Our columnists Mike, Toli, Brendan, and pretty much all of our former staffers had such impressive in-depth knowledge of their subjects and a talent in expressing those with thoughtful and fascinating pieces.

I'm really, truly going to miss jumping into our office chat room every day to talk to them and gush over the big news or the stupid industry move or our own personal lives. Come tomorrow, I fear I will be at a loss in regard to this. "I had so much more to write."

When the end of anything comes, I think we all wish that we can finish on our own terms. In this case, I wasn't ready to be done. I am so excited about everything coming this year and beyond in MMOs, for starters. I actually really like doing the news because it kept me in tune with what was going on, and every once in a while I'd get to break a big story or get advance notice on something top-secret.

But more than that, I'll miss doing my columns. I've had many here on Massively over the years, and while they were all important in their own way, there were a few that held a special place in my heart.

Road to Mordor was my very first column on the site and the primary reason I was hired on board. When I went to archive my posts the other day, I came across my first RTM column and experienced a heavy moment of feels. Oh, Justin of 2010. If only you knew what you were in for. I got to write about one of my favorite MMOs, off and on, for five years, and I sincerely regret that I'll never be there to help Road to Mordor actually get to Mordor.

I love lists, and apparently, so does the internet, which is why I lobbied to get Perfect Ten up and running on Massively. It's a weirdly inconsistent column for me: Sometimes it required a lot of research, sometimes it was just off-the-cuff, and sometimes I let my funny bone dictate the direction. But it was always a hoot to do and allowed me a remarkable degree of flexibility to talk about anything I wanted.

I was assigned One Shots a couple of years ago, perhaps as a punishment, although it's been my biggest point of contact with the community here at Massively. So I can't complain! I really dug seeing what bizarre and wonderful screenshots people sent in, and I love that the column had this epic backstory of failure, reader petitioning, and rebirth.

Finally, there was The Game Archaeologist. I felt strongly -- and still do -- that a site like Massively needed to continue to give love and attention to older MMOs and not just the new hotness. Doing TGA not only helped in this regard but taught me so much about so many topics and games that I was previously unaware existed. It was, hands-down, the most time-cosuming column to write due to the research, but each and every one felt rewarding. And I always thought I'd run out of games to cover, but then I'd find more and more and more. My "to do" list for TGA (which will go unfulfilled) is around 45 or so topics. So much more to write.

"So long, Massively, and thanks for the fish!"

I guess this is it: the last thing I'll write for Massively. I won't lie, I've got tears in my eyes because I care a lot about this site, the writers, the readers, and what we've done. But maybe it's time to move on and be satisfied and proud with past accomplishments.

If you want to stay in touch, you can follow me on Twitter (@Sypster), read my MMO gaming blog Bio Break, and listen to my bi-weekly MMO music podcast Battle Bards. I also think that the Massively Speaking podcast will be returning sooner rather than later (I wasn't kidding about taking it away from here). It's been truly humbling to be receiving stories of how much the podcast has meant to some people and how it's helped them through tough times in their lives. I had no idea.

Thank you all. It's been my privilege.
In this article: massively-meta, opinion, sunset
All products recommended by Engadget are selected by our editorial team, independent of our parent company. Some of our stories include affiliate links. If you buy something through one of these links, we may earn an affiliate commission.