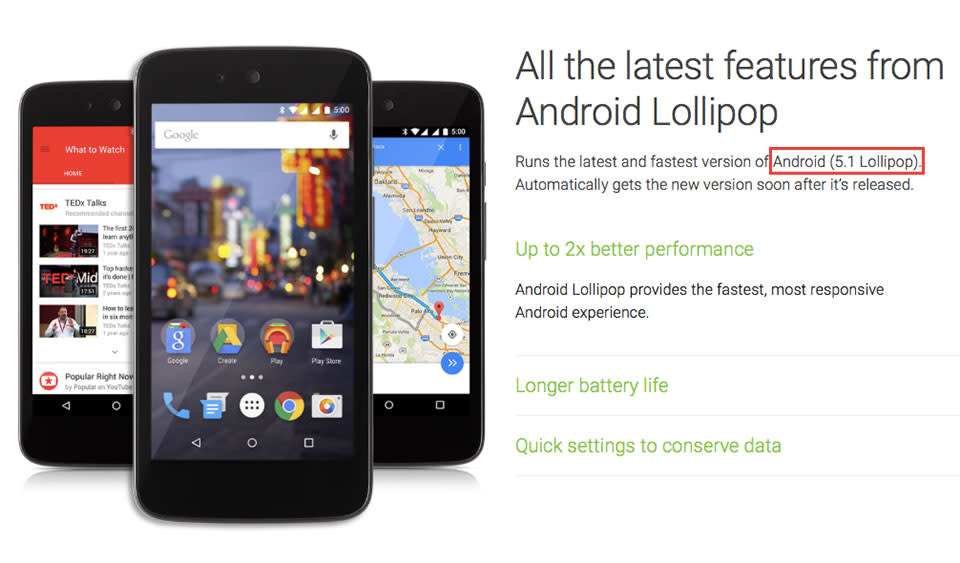 Well, it looks like someone forgot to the cue the fanfare. According to a recent report from Android Police, Android 5.1 is already floating around in the wild, just not where you'd expect. The new build - and its currently mysterious changelog - just made an appearance on a low-cost Android One device meant for sale in Indonesia later this month. To our knowledge, it's the first time Google has publicly acknowledged the existence of the update - all that's really left now is a big Google blog post commemorating the launch and a list of changes the release brings to the table.​

If a report run by AndroidPit late last year holds water, we're looking at a pretty hefty maintenance release. It's apparently all there: stability tweaks, better memory and battery management, connectivity fixes, not to mention the possible revival of a Silent mode. It's also known that Lollipop 5.1-powered Nexus devices have been popping up in the server logs for certain websites (AndroidPit included), so there's basically no question about it: The update's coming, and it's very likely coming soon. We've reached out to see if Google cares to shed more light on the situation, and we'll update this post as we learn more. This whole thing started when Google updated its Indonesian Android One landing page earlier today, complete with a tidbit claiming that such low-cost devices would run "the latest and fastest version of Android (5.1 Lollipop)". Given that one of Android One's major selling points is to bring the latest and greatest software updates to people in emerging markets, it's a little curious that none of the other international landing pages (think India, Bangladesh and Nepal) have gotten similar updates. Then again, it's not like we haven't seen a company representatives prematurely pull a trigger before. Tacit, purposeful confirmation? Human error? It doesn't matter -- this cat isn't going back in the bag.

In this article: android, android51, androidone, google, indonesia, lollipop, mobilepostcross
All products recommended by Engadget are selected by our editorial team, independent of our parent company. Some of our stories include affiliate links. If you buy something through one of these links, we may earn an affiliate commission.