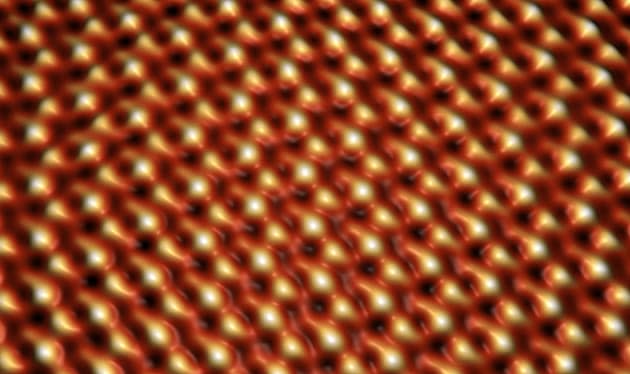 Step aside, graphene, "silicene" is the trendy new nano-material in town that could one day supercharge future tech. Scientists have created the world's first transistor out of the silicon-based material, and it's a mere one atom thick. Unlike its much-maligned graphene cousin -- which has yet lived up to its vast potential -- silicene is a much more interesting material for computer scientists. Thanks to the silicon base, it can form "band gaps" necessary for transistors, which could one day lead to faster chips that consume less power.

The feat came as a surprise to many observers, despite the fact that the "chip" only lasted a few minutes to due its instability. Up until recently, silicene was only a theoretical material and nobody expected a transistor to be built from it anytime soon. But the team succeeded by condensing an atom-thick layer onto a block of silver in a vacuum, then sealing it with alumina. Afterwards, they peeled away the silicene material from the silver block, leaving thin layers of silver and aluminum as protection. Scratching away portions of the silver resulted in a rudimentary, but functional transistor.

Up until recently, silicene was only a theoretical material and nobody expected a transistor to be built from it anytime soon.

The scientists plan to hone the process to create longer-lasting, functional chips in the near term. However, there's still some serious barriers, given the instability of silicene in the real world and difficulty in working with it. But as one scientists said, "The major breakthrough here is the efficient low-temperature manufacturing and fabrication of silicene devices for the first time." That's still quite a feat, but whether it leads to useful gadgets or not is a wide open question.

In this article: graphene, nanomaterials, NanoTechnology, Silicene, transistor, University of Texas
All products recommended by Engadget are selected by our editorial team, independent of our parent company. Some of our stories include affiliate links. If you buy something through one of these links, we may earn an affiliate commission.