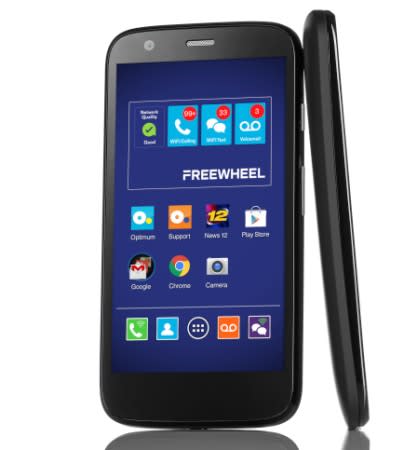 The all-WiFi phone service Cablevision announced in January is now available. Unlike the usual mobile carrier, the Freewheel phone (currently a $100 second generation Moto G) only operates on WiFi -- to keep costs down it doesn't look for 3G, LTE or any other kind of signal. Of course, if you're consistently in the range of wireless hotspots then that's not a problem, and it's pre-programmed to log in to any of 1.1 million Optimum hotspots in the New York area or "Cable WiFi" hotspots elsewhere. As promised, it's $10 per month for customers with Cablevision's internet service or $30 without, all to get unlimited calling, data and text messaging with no annual contract.

For now it's a curious alternative to traditional cellphones -- we've asked whether that Moto G can be used on regular carriers if things don't work out but haven't heard back yet -- even though it's not cheaper than competitors like Republic Wireless. The company is already considering rolling out the service as an app that works on other smartphones, and promises unspecified features on the way that "underscore WiFi's superiority over the legacy cellular model." Those interested can check out the FAQ or sign up on the Freewheel website, and mind the 30-day return policy if they find themselves stuck in a WiFi-less backwater one too many times.

In this article: cablevision, freewheel, hdpostcross, mobilepostcross, MotoG, optimum, OptimumOnline, unlimited, video, wifi
All products recommended by Engadget are selected by our editorial team, independent of our parent company. Some of our stories include affiliate links. If you buy something through one of these links, we may earn an affiliate commission.