AirFly Pro can stream Bluetooth audio to and from any 3.5mm jack 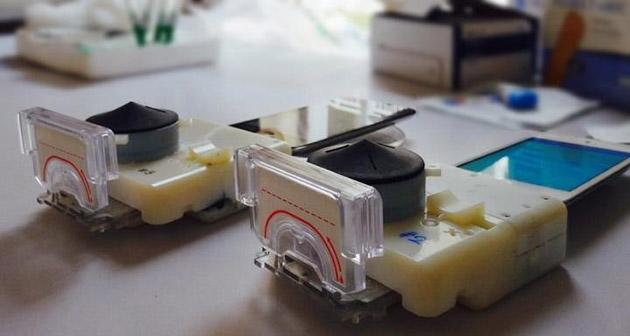 A dongle created by Columbia University researchers can turn any smartphone (whether iPhones or Android devices) into an HIV and syphilis tester. Even better, it only takes 15 minutes and a tiny drop of blood to get a result -- the device doesn't even need a battery to work. According to the paper the researchers published in Science Translational Medicine, the dongle performs enzyme-linked immunosorbent assay (ELISA) to detect HIV antibody, treponemal-specific antibody for syphilis, and non-treponemal antibody for active syphilis infection. Labs don't currently offer the three tests needed to detect those in a single format. ELISA machines, by the way, cost around $18,000, but each of these dongles only cost around $34 to manufacture.

To test, you prick a finger and put your blood on the device's plastic collector. After that, you'll have to launch its accompanying app and physically push a button down to release the reagents needed for the test (as shown in the video below). It's pressing a button, instead of automating the process, that allows researchers to eliminate the need for a battery. The device gets whatever little processing power it needs from the smartphone, tablet or computer itself -- yep, it works with other types of electronics, because it plugs in via the headphone jack.

The group of researchers was led by Samuel K. Sia, an associate professor of biomedical engineering at Columbia Engineering. Sia and his team have been developing mobile HIV/syphilis testing labs for a long time, and one of their earlier creations is the mChip, which is a credit card-sized device that can also test for those STDs. Each mChip only costs around a $1 each, but unlike this dongle which works any phone, it needs a $100 diagnostic kit in order to work.

The dongle recently underwent pilot testing in Rwanda, where it was used on 96 patients, mostly from prevention-of-mother-to-child-transmission clinics and voluntary test centers. Unfortunately, it incorrectly identified some patients as infected when they weren't, but its creators are working to improve its accuracy before doing a bigger trial run.

In this article: dongle, hiv, medical, medicine, mobilepostcross
All products recommended by Engadget are selected by our editorial team, independent of our parent company. Some of our stories include affiliate links. If you buy something through one of these links, we may earn an affiliate commission.