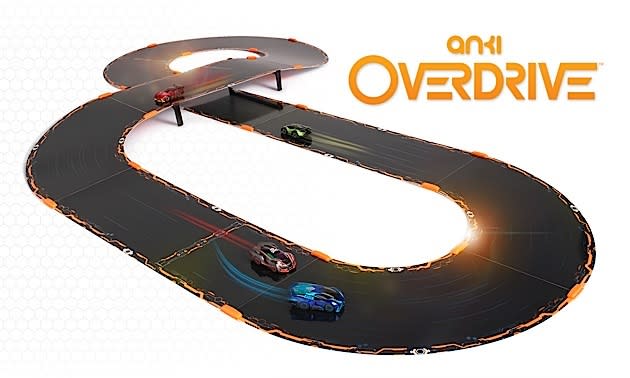 Two years ago, Anki introduced itself to the world at the Apple WWDC keynote with robotic race cars that could maneuver around the track all on their own. The company has grown substantially since then thanks to strong initial interest and growing sales -- Anki tells us that it was the second-best-selling toy on Amazon this past Christmas -- but now, it's ready for the next step. Today, the company is introducing a completely new version of its toy cars, and it's called Anki Overdrive. Not only does the second generation of Anki involve new cars, a new app and new gameplay mechanics, but it will also now ditch the rollable mats and incorporate a brand-new modular track system that lets players build their own custom race circuits. "This is the biggest thing we've decided to do," says Hanns Tappeiner, co-founder and president of Anki, on the move away from rollable mats. The truth is, he says, the company wanted modular tracks from the very beginning, but just couldn't figure out a way to make them work. Plus, the rollable mat was just convenient to roll out and roll back up. "But at the same time, it was the biggest limitation we had," he adds. "One of the most requested features from people we had is, 'We want more tracks; we want more tracks.' [...] We started releasing additional ones, but at some point it doesn't become scalable."

The solution, the company soon discovered, was to go back to the modular-track idea, but have it so that it's easy to build up and break down. They ended up going with a magnetic connector system, where the track pieces attach to each other in the same way the MagSafe charger does with Apple's laptops. Another key aspect of these track pieces is that they're made out of a flexible material so that you can bend and position them to make hills or valleys. "We want people to use anything they have at home [to place them] ... boxes, shoes, the coffee table or anything you like," Tappeiner says. This way, you could build three-dimensional tracks where the cars could climb hills or go in tunnels or even fly off a special jump piece.

In order to have this new modular track work, Anki had to reconfigure the car's software. In the past, because they only had three fixed mats, the ink embedded in the mat's location codes would tell the car where exactly it was and it would know what to do. With the modular track system, the cars now have to figure out where they are and where to go in real time because they have no idea what the track looks like. Anki had to embed an additional layer of "super code" in the track that tells the car to act immediately. So, for example, a curved section would immediately cause a car to turn, while it would drive on as normal on a straight track. But Tappeiner tells us that the phone can suppress this if the player wants it to, especially if it's to obtain a certain game objective. Some of the optional track pieces include the aforementioned jump track, a four-way intersection and a "U-Turn" module that forces cars to do a 180-degree turn.

In addition to the new modular tracks, Anki is also introducing a new campaign mode so that you can decide to play solo against AI "Commanders" in a tournament setup. There'll be more gameplay modes in the future, and though Anki wouldn't tell us all the details, we did figure out one possible option could be a Capture the Flag-style game. The new Overdrive cars are also more detailed -- Tappeiner tells us they're each individually hand-painted. Last but not least, Anki is introducing a four-car charger setup instead of the jewel case chargers that the cars had before.

Oh, and if you have the old Anki Drive setup? Don't worry, because your cars will work with the new Overdrive tracks too -- Anki will send out a software update to upgrade the vehicles. The new Overdrive cars are also backwards-compatible with the old rollable mats, so you don't have to throw them out just yet.

The Anki Overdrive starter kit starts at around $150, while the mobile app is free as before. The starter kit includes 10 tracks -- six curves and four straights -- which you can use to build up to eight different tracks. The individual expansion track packs can vary between $10 and $30, depending on which you choose. And as for when you can get them? Well, you'll have a long time to wait -- they're slated to come out in September. But if you happen to be in New York and you're dying to check them out, well, you could go over to the New York Toy Fair and see them live and in action this weekend.

In this article: anki, ankidrive, ankioverdrive
All products recommended by Engadget are selected by our editorial team, independent of our parent company. Some of our stories include affiliate links. If you buy something through one of these links, we may earn an affiliate commission.