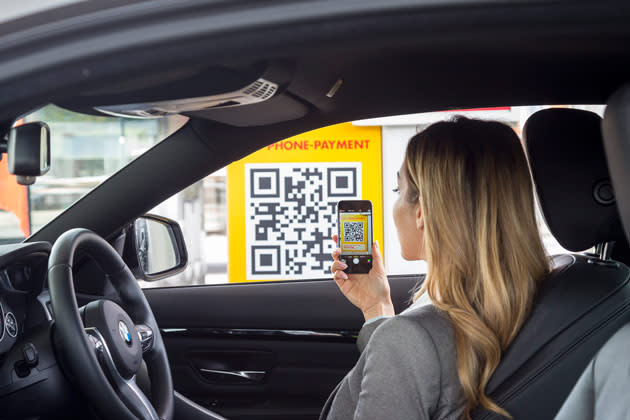 Those of us in the know are patiently waiting for QR code technology to take off, as it inevitably will, but Shell and PayPal aren't willing to stand by and end up falling behind the curve. Pouncing on the flourishing standard, the two have shaken hands on a deal that'll soon let patrons at Shell petrol stations pay for fuel using only their phones, PayPal details, and some well-placed QR codes. Having successfully trialed the mobile payment method way back in 2013, it's ready to roll out to the "vast majority" of Shell garages in April, though will initially be reserved for members of Shell's Drivers' Club programme before randoms can get involved later this year. "Using a debit or credit card to pay at the pump simply isn't convenient enough," a fictional spokesperson commented, adding that booting up the Android/iOS Shell Motorist or Paypal apps, and pairing with a pump via a QR code so your PayPal credentials can be charged is the stuff futuristic nightmares dreams are made of. A receipt of the transaction will also be sent to your phone when you're done, confirming you've successfully completed the process and not screeched off with a full, free tank.

In this article: fuel, mobilepayments, mobilepostcross, paypal, petrol, qrcode, shell, transportation
All products recommended by Engadget are selected by our editorial team, independent of our parent company. Some of our stories include affiliate links. If you buy something through one of these links, we may earn an affiliate commission.