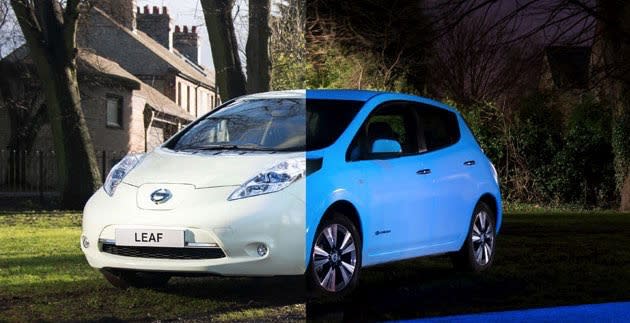 By now you've probably heard of electric cars, hybrids and hydrogen vehicles -- but what about a car powered by saltwater? Enter the 1,075-horsepower Quant F supercar, whose four electric motors are powered by an electrochemical reaction from the combination of two liquids with metallic salts that act as an electrolyte. In other transportation news, Nissan just unveiled the world's first glow-in-the-dark electric car! The tricked-out Leaf features a special paint job that absorbs UV light and glows bright blue for eight to 10 hours after the sun goes down. The UK has already approved testing autonomous cars on public roads, and the nation's first self-driving car is ready to hit the streets. The Lutz Pathfinder pod car seats two, goes 15 miles per hour and it's incredibly cute. PG&E signaled a bright future for EVs in California by announcing plans to build 25,000 charging stations. But France is offering something even more enticing: an $11,000 check if you upgrade to an electric car.

What will the cities of tomorrow look like? They could be filled with futuristic buildings like these glimmering pod skyscrapers proposed for Paris. Or how about a house that produces enough energy to power its neighbor? It turns out the technology is available today -- this active house developed by Werner Sobek generates twice as much energy as it needs without fossil fuels. (If you'd like a closer look at some of the green building strategies that make this feat possible, check out this handy infographic.) Inhabitat also featured an innovative camper home that expands to three times its size with adjustable awnings, and a gorgeous ribbon chapel with a twisting staircase that spirals toward the sky.
It was a big week for energy news as Congress approved the controversial Keystone XL pipeline, which would carry millions of gallons of tar sands across the US. The approval sent the bill to the White House for an anticipated veto from President Barack Obama. Meanwhile, Apple is on a roll in the renewable energy department. Just a week after announcing plans for a solar-powered command center, the company has invested $850 million into a new California solar plant that will power all of its operations. We've seen plenty of buildings and gadgets that harness the sun's energy -- but what about a solar-powered creature? Scientists just discovered a sea slug that steals genes from algae so that it can photosynthesize like a plant.
In this article: Apple, eco-friendly, green, inhabitat, ThisWeekInGreen, WeekInGreen
All products recommended by Engadget are selected by our editorial team, independent of our parent company. Some of our stories include affiliate links. If you buy something through one of these links, we may earn an affiliate commission.