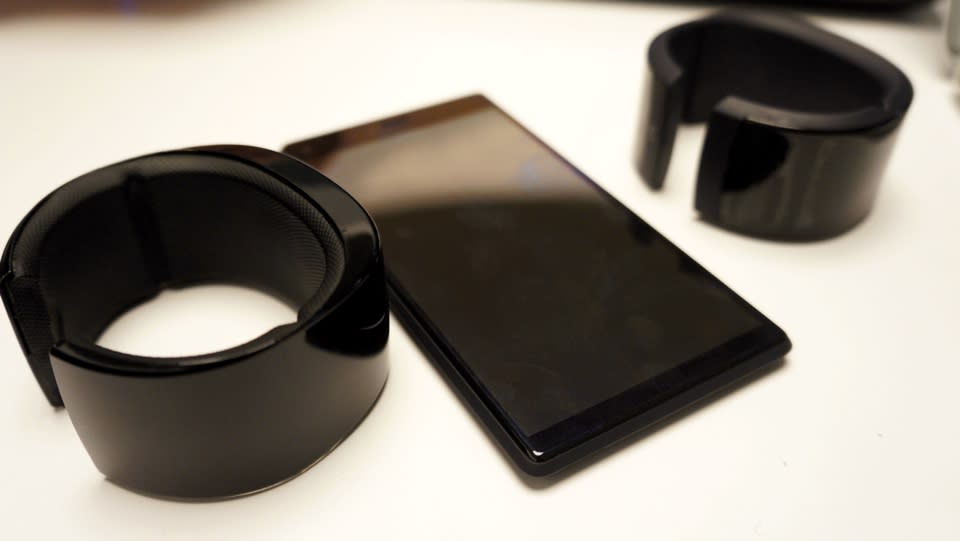 The folks behind the giant and retro (but not quite useful) Neptune Pine smartwatch are back -- and this time they're aiming to flip technology paradigms. Their new product, the Neptune Duo, is made up of two familiar looking devices that don't work the way you'd expect. The Neptune Hub is a chunky wristband that actually houses all of the technology you'd normally find in a smartphone, and it's accompanied by the Neptune Pocket, a 5-inch screen that just serves as a wireless dummy display for the Hub. The idea, according its 20-year-old creator Simon Tian, is to evolve our relationship with wearables by putting your primary device on your wrist. The only problem? Tian still isn't quite clear on why, exactly, you'd want to do that. After raising more than $800,000 on Kickstarter for the original Neptune Pine, Tian and his small team likely felt emboldened to push boundaries even further with their next project. But, in this case, they may have gone a bit too far. The non-functioning prototypes we tried on felt way too uncomfortable to wear all day, and we were also skeptical of Neptune's ability to keep a solid wireless connection going between the two devices. It's annoying enough to deal with apps crashing and reception issues on our smartphones, who needs another inevitable point of failure? Tian mentioned that having your core device on your wrist could also be more secure than carrying it around in your pocket, but that argument also feels thin (thieves have been snatching watches far longer than smartphones, after all).

Under the hood, the Neptune Hub packs in a quad-core processor, LTE, GPS, health tracking sensors, and almost everything else you'd expect from a smartphone. The Pocket, on the other hand, is basically just all screen and battery. It may seem crazy to make a wearable with a small battery your main mobile device, but Neptune notes that you'll be able to recharge the Hub throughout the day by hooking it up to the Pocket. That's a novel solution, but it's certainly not a user-friendly one.

Ultimately, the Neptune Duo reeks of a device built by geeks for geeks, but with little thought about how normal people actually use technology. We can't imagine too many would be eager to trade in their slim smartphones for a giant sci-fi movie prop. And there are still plenty of usability concerns to to deal with, like the mere act of taking phone calls. You can use the wearable's speakerphone or a wireless headset to chat with people, or you can push the call to the Pocket, which adds another layer of complexity. (Neptune told us initially that the Pocket couldn't take calls, but they've contacted us to say that's not the case.) And given the many durability issues we've seen with wearables, using one as your primary mobile device pretty much feels like tempting fate. We'd have a bit more faith in the project if we saw the Duo working, but right now it's just a dumb prototype.

If you're still intrigued (despite the many red flags), you can preorder the Neptune Duo today starting at $49 down, with $649 due at shipment. You can also pledge more money up front for a discount: $199 down with $399 due later, or go all in for $498. The company expects to start shipping the Duo by the end of the year.

In this article: mobilepostcross, Neptune, Neptune Duo
All products recommended by Engadget are selected by our editorial team, independent of our parent company. Some of our stories include affiliate links. If you buy something through one of these links, we may earn an affiliate commission.