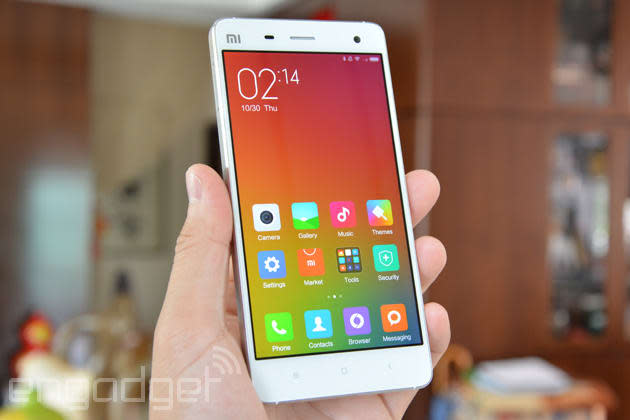 We've been charting Xiaomi's steady rise in China over the past few years, but the latest stats from IDC make it clear just how far the tiny phone company has come (as well as how far Samsung has fallen). Xiaomi ended up leading China's smartphone market last year with a 12.5 percent share of shipments, while Samsung came in second place with a 12.1 percent share. Sure, those numbers may make it seem like Xiaomi and Samsung are basically on the same level, but what's really important is how they've changed from 2013. Xiaomi's market share actually rose 186 percent last year, while Samsung's fell around 22 percent (and it was the only smartphone company among China's top five to fall). The Korean electronics giant was already facing slumping sales early last year, when we argued that China would likely be its next big opportunity for a comeback. But, from the looks of it, Xiaomi basically ended up eating Samsung's lunch.

IDC notes that Xiaomi's reliance on flash sales (which creates tons of marketing hype without much effort), low prices, and powerful hardware all helped it land the top smartphone vendor spot. But Xiaomi wasn't the only big winner last year: Apple also ended up coming in second place during the last quarter in 2014 thanks to the double-whammy of the iPhone 6 and iPhone 6 Plus. While Apple didn't make enough shipments to land a spot among the top five smartphone companies in China last year, there's a good chance it'll get there this year if it keeps shipments up. The big takeaway? 2015 is probably going to be a rough year for Samsung.

In this article: China, mobilepostcross, Xiaomi
All products recommended by Engadget are selected by our editorial team, independent of our parent company. Some of our stories include affiliate links. If you buy something through one of these links, we may earn an affiliate commission.