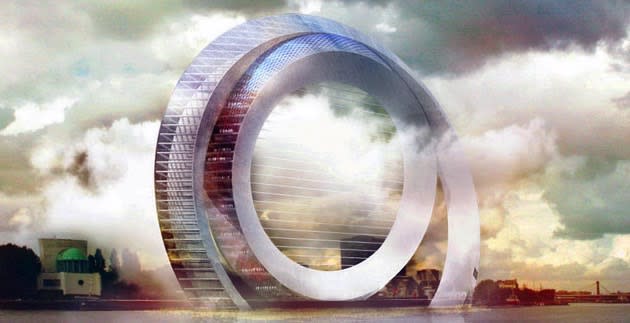 Tesla has owned the electric car space in recent years, but another major Silicon Valley company could be nipping at its heels -- rumor has it that Apple is developing an electric "minivan-like vehicle" of its own. It's not clear if the rumors are true, but this week electric vehicle battery manufacturer A123 Systems sued Apple for poaching its employees. Porsche is also taking aim at Tesla with plans to launch an all-electric rival to the Model S by 2019. In other green transportation news, Volkswagen has announced plan to build 100 fast electric car-charging stations in the US, and it will invest $10 million to support electric vehicle infrastructure by 2016.

Italian designers Marco Ferrari and Alberto Franchi developed a solar-powered yacht for the Young Designer of the Year 2015 contest. The yacht would feature sails that are actually made from flexible solar panels that generate energy for the boat's luxury amenities. Biking in the rain isn't much fun, because there's no way to avoid getting wet -- until now. A London-based team recently launched a Kickstarter campaign for the world's first umbrella for your bike. The design is basically like a narrow windshield that protects your face and body from the elements. Although much of the country is still in the depths of winter, it isn't too early to start thinking about summer adventures. One look at this geodesic dome-inspired portable camper will have you dreaming about hitting the open road. Ever wonder what it would be like to live in a bus? In a short essay about her adventures, Inhabitat writer Michelle Kennedy Hogan explains what it's been like living in a converted school bus with five kids for the past six months.

Tesla is developing a new type of battery that could power not only your car, but also your house. In an investor call this week, Tesla CEO Elon Musk announced plans for a battery that could take your home off the grid, and production could begin within the next six months. In other clean energy news, the UK just signed off on what will soon be the world's largest offshore wind farm. The wind farm, which will be located about 80 miles off the Yorkshire coast, will consist of about 400 wind turbines. Meanwhile, Portland is generating renewable energy by taping an unusual resource: its plumbing pipelines. Turbines installed within the city's pipes generate energy every time a tap is turned on or a toilet is flushed. China is one of the world's biggest energy users, but it is quickly moving toward renewables. In 2014, China increased its wind power output by 23 percent and now wind provides 2.8 percent of the country's total energy. The Dutch invented the windmill, so it makes sense that latest windmill innovation would take place in the Netherlands. The Dutch Windwheel is a concept for a sustainable landmark that would house 72 apartments within a circular steel and glass frame that contains a silent, motionless wind turbine. And in Israel, an energy company has solved the problem of how to generate solar energy when the sun sets. Brenmiller Energy is planning to develop a new solar facility that uses biomass as a backup during the four hours when the plant is not generating electricity.

On the green architecture front, British megafirm Foster + Partners recently opened a new Apple store in Hangzhou, China to usher in the Chinese New Year. The modernist store features glowing ceilings, a cantilevered floor and glass staircases. The new headquarters for Intecs Spa recently earned Casaclima Class A certification for energy efficiency, making it the first non-residential building in Rome to earn the distinction. And in Poland, a team of architects provided new space for apartment dwellers by building a swirling green pathway that extends from a balcony out into the sky. Star Wars fans rejoice: Lego has announced plans to release 32 new Lego Star Wars sets depicting scenes from the previous six movies. If you love Lego and hate making pancakes the old-fashioned way, this is for you: Designer Miguel Valenzuela has created a Lego robot that makes perfectly round silver dollar pancakes. And on the wearable tech side of things, Epson launched its new SureColor F7170 digital fabric printer at New York Fashion Week. The new printing technology will enable fashion designers to create virtually any kind of color or pattern they can dream up.

In this article: Apple car, eco-friendly, green, inhabitat, InhabitatsWeekInGreen, solar, solar power, tesla, WeekInGreen
All products recommended by Engadget are selected by our editorial team, independent of our parent company. Some of our stories include affiliate links. If you buy something through one of these links, we may earn an affiliate commission.