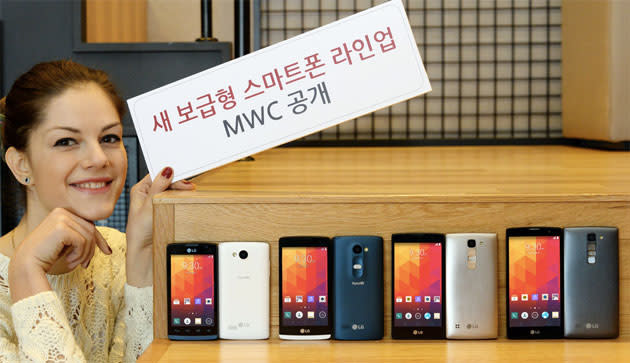 LG's already said it's bringing a new wearable to MWC, but it's also got a shoebox full of phones to showcase too. Like previous MWCs, the phone company has transplanted features from its flagship smartphone to models with smaller screens... and price tags. The biggest of the four new midrange phones, called the Magna, has a 5-inch display and 5-megapixel front-facing camera, alongside an 8-megapixel on the back. LG's even bought those back-of-phone buttons to these new models, barring the smallest 4-inch LG Joy. We've summarized the rest of the family after the break, but in an arguably depressing sign of the times, LG's also tweaked the sensitivity of its gesture recognition to incorporate selfie stick users. You can't stop the selfie. Unless you ban them.

In this article: lg, lgjoy, lgleon, lgmagna, lgspirit, mobilepostcross, mwc, mwc2015, selfie, selfiestick
All products recommended by Engadget are selected by our editorial team, independent of our parent company. Some of our stories include affiliate links. If you buy something through one of these links, we may earn an affiliate commission.