A quick spin through turntable history 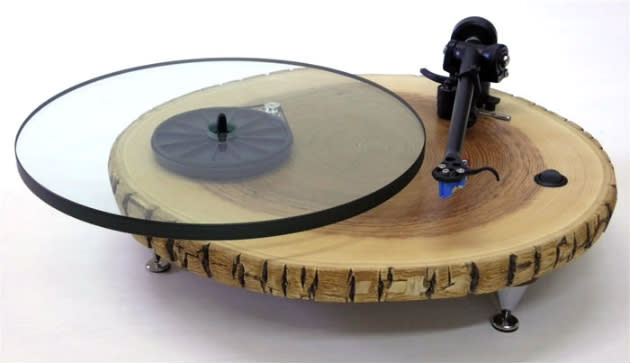 Raise your hand if you remember the Kickstarter campaign for Silvan Audio Workshop's wood turntable. It's a sleek, ornamental design featuring a slab of wood, a glass platter, supporting spikes and high-end parts from UK audio manufacturer Rega. It struck a chord with some of our readers yesterday, and especially with Joel Scilley, a longtime turntable and audio gear manufacturer operating under the name Audiowood. He's been selling "Barky," a turntable just like Silvan Audio Workshop's, since 2009. Scilley claims that the Kickstarter design infringes on his copyright, and he's asked the campaign's owner, Kent Walter, to halt all crowdfunding. He's also filed a DMCA notice with Kickstarter, so far to no avail.

Scilley's issue with the Silvan Audio Workshop campaign isn't its use of Rega parts or slabs of wood -- it's all about the design similarities.

"The Silvan Audio turntable is identical to my design in every way but two: a change of wood types (which I too have done), and a different brand of spike feet (which, importantly, from a visual design perspective, are still spikes)," Scilley says. "The parts kit is the same, including the glass platter which allows tree rings to be seen, and the overall concept is identical."

The Barky turntable has been featured in more than 20 major international print publications and dozens of online outlets since 2009, which Scilley says lends him protection under US copyright law. He offers the following quote from the US Copyright Office as support of this claim: "A work is automatically protected by copyright when it is created, that is, 'fixed' in a copy or phonorecord for the first time. Neither registration in the Copyright Office nor publication is required for copyright protection."

Walter doesn't see his Silvan Audio Workshop turntable as an infringement or copycat art, and he says he has nothing but respect for Scilley and his work. Walter thinks that some of Scilley's concerns may stem from the fact that, now, he has competition.

"Really, the very last things I want are a bunch of drama or any harm to Audiowood," Walter says. "Legal stuff aside, if there was any intention to copy anything, then on an ethical and creative level, I wouldn't want to do it. We had a similar idea, Rega is far and away the best parts for making it a reality (due to the way they build their products), and I would love to be able to coexist."

Scilley first asked Walter to voluntarily halt the campaign, and he noted that if it were successful, confusion over the design would hurt his own brand and business. Walter says in these messages -- and on the Vinyl Collective forum -- that he conceived of the design without any outside influence in 2011, and later made a wood turntable as a wedding present for a friend. Response to that present pushed Walter to consider expanding production via Kickstarter. In September, someone on a message board sent Walter a link to Audiowood.

After checking out Scilley's site, Walter decided to go ahead with the Kickstarter campaign, with the belief that they were both simply trading in custom parts for factory ones. Considering potential copyright protection and the popularity of the Barky turntable model, this isn't how Scilley sees it.

"Barky is my signature design," he says. "It is on my business cards, the cover page of my website, and it is the most published of my designs to date. In copying this model, Silvan chose the most successful of my designs." Scilley eventually sent off a DMCA notice to Kickstarter, but that probably won't lead to any action, legal or otherwise.

"Thanks for writing in," Kickstarter wrote to Scilley. "Unfortunately, this is a matter that falls outside our Copyright and Trademark policies, and is not one that we are equipped to assess or act upon. If you'd like to pursue this further, you will have to do so directly with the project creator."

In a separate message to Engadget, a Kickstarter representative offered the following note: "It's our policy to not comment on legal issues or complaints along those lines. In general we follow a detailed procedure for copyright complaints we receive, as outlined by the DMCA."

Scilley remains in contact with Walter, and the Silvan Audio Workshop Kickstarter now includes an update and an FAQ entry addressing the issue.

"In any case, my priority is to be really open and transparent with everyone, and if anyone would rather go to Audiowood than participate in what I'm doing, I completely respect that and wish Joel absolutely the best," Walter says.

In this article: audiowood, copyright, kickstarter, silvanaudioworkshop, turntable, wood
All products recommended by Engadget are selected by our editorial team, independent of our parent company. Some of our stories include affiliate links. If you buy something through one of these links, we may earn an affiliate commission.