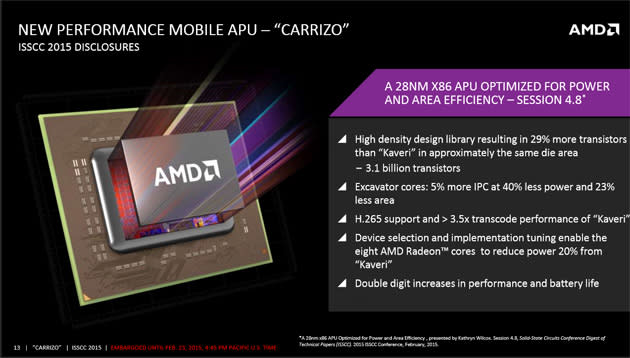 Intel isn't the only chip giant championing battery life over performance this year. AMD has revealed Carrizo, a processor range that's focused heavily on extending the running time of performance-oriented laptops. While there will be double-digit boosts to speed, there's no doubt that efficiency is the bigger deal here. The new core architecture (Excavator) is just 5 percent faster than its Kaveri ancestor, but it chews up 40 percent less energy at the same clock rate -- even the graphics cores use 20 percent less juice.

Not that this is the only real trick up AMD's sleeve. Carrizo is the first processor to meet the completed Heterogeneous System Architecture spec, which lets both the CPU and its integrated graphics share memory. That lets some tasks finish faster than they would otherwise (since you don't need as many instructions), and it could provide a swift kick to both performance and battery life in the right conditions. You'll also find dedicated H.265 video decoding, so this should be a good match for all the low-bandwidth 4K videos you'll stream in the future.

The new chip is pretty promising as a result. With that said, its creator will undoubtedly be racing against time. Carrizo is expected to reach shipping PCs in the second quarter of the year, or close to Intel's mid-year target for its quad-core Broadwell processors. You may find shiny new AMD and Intel chips in PCs at around the same time -- that's good news if you're a speed junkie, but it's not much help to AMD's bottom line.

In this article: amd, apu, carrizo, chip, cpu, desktop, excavator, h.265, heterogeneoussystemsarchitecture, hsa, isscc2015, laptop, processor
All products recommended by Engadget are selected by our editorial team, independent of our parent company. Some of our stories include affiliate links. If you buy something through one of these links, we may earn an affiliate commission.