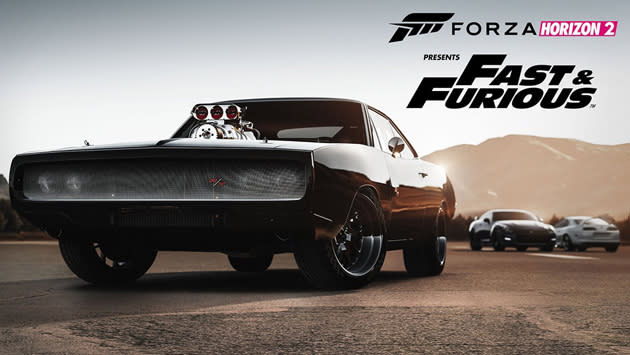 Most attempts at turning the Fast & Furious movies into video games haven't exactly set the world on fire, but here's one that might be worth playing. Microsoft, Turn 10 and Universal have teamed up for Forza Horizon 2 Presents Fast & Furious, a slightly awkwardly-titled Horizon 2 expansion that has you scoring cars for the Furious crew's missions. It should have the same open-world racing that you saw in the latest Forza title (generally a good thing!), but with 11-plus cars from the movie franchise, including Dom's killer '70 Dodge Charger R/T above, and Ludacris doling out racing challenges. Don't own Horizon 2? No worries -- the expansion is standalone and doesn't require the base game to play. Whether or not you're a fan of Brian, Dom and company, it won't hurt much to try this out, either. The Fast & Furious add-on will be free on the Xbox 360 and Xbox One between March 27th and April 10th, after which it'll cost you a not-too-outlandish $10.

In this article: fastandfurious, fastandfurious7, forzahorizon2, furious7, gaming, microsoft, racing, racinggame, turn10, video, videogames, xbox360, xboxone
All products recommended by Engadget are selected by our editorial team, independent of our parent company. Some of our stories include affiliate links. If you buy something through one of these links, we may earn an affiliate commission.