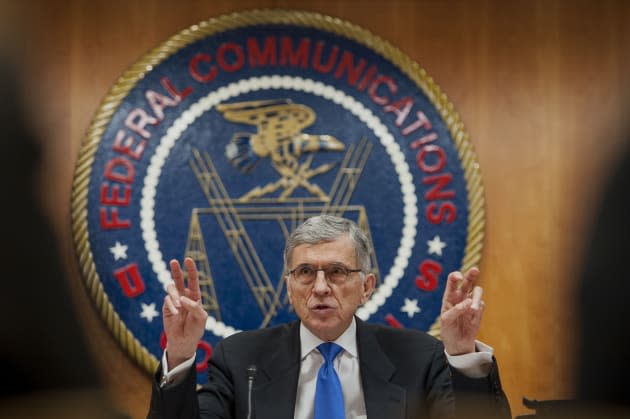 While you may have been doing a victory lap around your cubicle in the last few hours, not everyone is so enthused about the FCC's decision today. The commission voted to officially classify broadband internet as a Title II public utility, and it's already prepared for lawsuits from service providers. While court proceedings will take time to hash out, a war of words wages on in the immediate aftermath, so we've compiled comments from both sides on the matter. Let's start with Verizon, shall we? Big Red said it wouldn't sue if the FCC passed new neutrality regulations, but the wireless company was one of the first to react. The company posted its statement in Morse code, calling the decision a "Throwback Thursday" that "imposes 1930s rules on the internet." Thankfully, it also included "a 21st century" version for those of us unable to translate. Even then, the press release was set in a typewriter font to make sure we all got the point. Keep this in mind: Verizon already sued the FCC over net neutrality once.

"The FCC had targeted tools available to preserve an open internet, but instead chose to use this order as an excuse to adopt 300-plus pages of broad and open-ended regulatory arcana that will have unintended negative consequences for consumers and various parts of the internet ecosystem for years to come."

-- from Verizon's statement on The FCC's Title II regulations

As you might expect, AT&T wasn't too thrilled either. Senior EVP Jim Cicconi took to the company's Public Policy Blog to state its case, explaining that today's vote indicates that these net neutrality rules are yet another partisan rift within the US government. Cicconi maintains that AT&T fully supported the 2010 ruling on the matter -- one that was eventually struck down in court -- warning that we'll likely be debating the issue again in a few years.

"Instead of a clear set of rules moving forward, with a broad set of agreement behind them, we once again face the uncertainty of litigation, and the very real potential of having to start over -- again -- in the future."

Industry organizations voiced displeasure with the ruling too, with the likes of the Consumer Electronics Association, CTIA, USTelecom and others chiming in. The CEA's CEO Gary Shapiro reiterated that it supports an open internet, but added that today's decision points things in the "wrong direction." "Rushing to regulate the internet threatens to slow down broadband investment, and reduces competition among providers, which helps keep broadband costs low," Shapiro explained.

"We hope the FCC and Congress will now work together to take a U-turn and reach a balanced and bipartisan compromise that includes deploying additional spectrum and ensuring Americans have open and robust internet access." And then there's Comcast. The service provider has been a vocal opponent of the FCC's plans for quite some time, and today is no different. Like other companies and organizations, it pledges that it's all for an open internet, but doesn't support broadband being classified as a utility. Executive Vice President David L. Cohen urged Congress to respond, moving toward a solution that acts "in a bipartisan manner with a consensus approach that accomplishes the common goals of stakeholders on all sides of the open internet debate."

"We fully embrace the open internet principles that have been laid out by President Obama and Chairman Wheeler and that now have been adopted by the FCC. We just don't believe statutory provisions designed for the telephone industry and adopted when Franklin D. Roosevelt was president should be stretched to govern the 21st century internet."

Republicans were also quick to criticize the ruling. Senator John McCain questioned how allowing the government to regulate an effort being hailed as net neutrality would be effective using similar rules meant to discourage telephone monopolies. "This is a matter for Congress to carefully consider and correct," McCain argued, sharing that sentiment with many others.

"It upends the longstanding hands-off approach to the internet that has been taken since its advent -- one that has encouraged innovation and allowed the internet to become what it is today." It's no secret that the White House is on board with the FCC's net neutrality leanings, and President Barack Obama cited today's events as yet another example of the US government responding to millions of people clamoring for change, thanking everyone that participated in the effort.

"I ran for office because I believed that nothing can stand in the way of millions of voices calling for change. That's the backbone of our democracy -- and you've proven that this timeless principle is alive and well in our digital age."

Democratic Senators Al Franken and Cory Booker both applauded the FCC vote as well. Booker called the decision "a landmark day in the history of the internet," and while Franken is well aware of the Republican efforts to stall the work that been done, he pledged to "continue to make sure everyone understands what's at stake."

"Net neutrality is important for consumers, for small businesses and startups trying to compete with the big guys, and ultimately, for the innovation that has helped drive our economy for the past several decades."

The FCC decision was made without the blessing of Congress, so that legislative body could indeed vote to strike it down. And just like the fate of the last net neutrality agreement, the regulations may meet the same fate in court. For now, though, it's unclear when lawsuits will challenge today's ruling, or if Congress will take matters into its own hands. The opposition might not be as strong as we predict, because as The New Yorker's Tim Wu points out, everyone was wrong about this whole net neutrality thing anyway.

If you're still looking for more info, the folks at Public Knowledge are holding an AMA tomorrow at 2:30 ET.

In this article: att, broadband, cea, ctia, fcc, hdpostcross, internet, mobilepostcross, netneutrality, reaction, titleii, verizon
All products recommended by Engadget are selected by our editorial team, independent of our parent company. Some of our stories include affiliate links. If you buy something through one of these links, we may earn an affiliate commission.