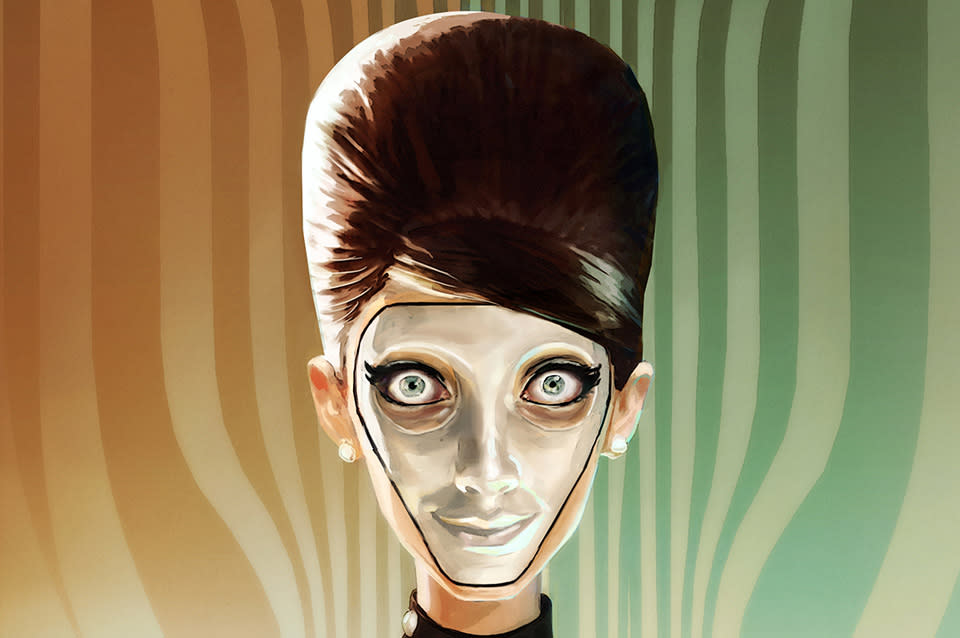 Smile for the camera -- and for the TV, and during the walk to the store, and while you're sitting in the living room, in the dark, all alone. Smile, because if you don't, they will come for you. That's the story behind the first trailer for We Happy Few, the new game from Compulsion Studios, maker of PlayStation 4 launch game Contrast. We Happy Few features a "drug-fueled, retrofuturistic city in an alternative 1960s England," filled with citizens with permanent smiles literally affixed to their faces. It's creepy, unsettling and cheerful all at the same time. Think BioShock with a splash of V for Vendetta and a smattering of picture-perfect Stepford.

"I will say that Bioshock wasn't a direct inspiration, it's just that our interests have kind of always aligned with Irrational's games (people made the same comparison with Contrast)," Compulsion marketing director Sam Abbott says. "It's a pretty daunting comparison, given that we're less than one-tenth their size." Compulsion has just 11 employees, all working in an old gramophone factory in Saint Henri, Montréal. The quirky location fits the studio's goals, to create artistic and unique games with more soul than standard hero-adventure titles. Compulsion's first game, Contrast, was full of style, starring characters with lean, spindly limbs running around the shadows, jazz bars and circuses of 1920s France. Compulsion's studio space lends itself to these types of otherworldly, historically inspired stories.

"It was a very old building that was completely run down when we came here, but it has been restored over the past five years," Abbott says. "These days, it still has holes in the ceilings, random bridges in the air that make no sense, and the most confusing layout known to man, but it's home. It's also home to a bunch of other small businesses and startups, and so is quite creative and filled with an incredibly eclectic group of people. It doesn't really affect our games so much as provides a really interesting environment to work in. It's definitely not a big clean office building where we stare into our cubicles wondering what the weather's like outside."

We Happy Few is in development for PC and consoles, specifically not mobile and not free to play, Abbott says. Aside from this bit of information, We Happy Few remains mysterious, with only a launch trailer and a two-sentence description. It won't stay that way for long, though: Compulsion will show off the game at PAX East in Boston next week, and the studio plans to involve the gaming community directly in We Happy Few's development. Compulsion learned the importance of early feedback from the launch of Contrast -- a game that received high points for style but largely fell short in terms of gameplay.

"It's influenced how we're creating the next game," he says. "The biggest thing we took away from it is that working in a vacuum for a long time can be great, but we'd have made a better game last time around if we'd had more people playing it right from the start."

In this article: 1960s, bioshock, compulsion, CompulsionStudios, contrast, england, hdpostcross, Indie, StepfordWives, VForVendetta, WeHappyFew
All products recommended by Engadget are selected by our editorial team, independent of our parent company. Some of our stories include affiliate links. If you buy something through one of these links, we may earn an affiliate commission.