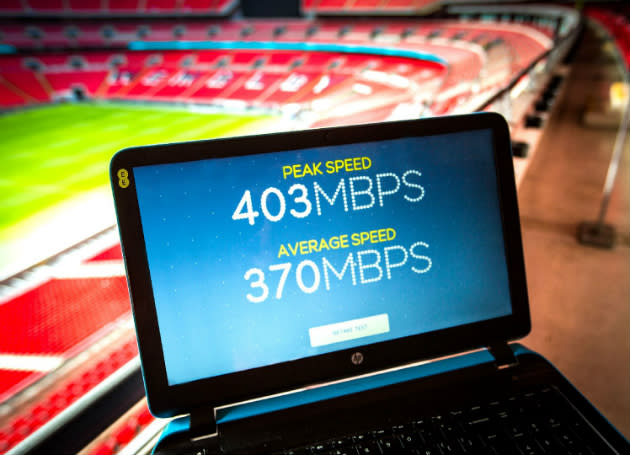 EE was the first 4G network operator in the UK, and it's now hell-bent on staying the fastest. After launching its LTE-A network (aka 4G+) in central London last October, it's trialling new spectrum configurations that could boost speeds even further. If you haven't been keeping up with all the network developments, here's a quick primer: standard 4G can offer theoretical download speeds of up to 150 Mbps, while LTE-A doubles that hypothetical maximum to 300 Mbps. To achieve this, EE added an extra 20MHz of 2.6GHz spectrum on top of its existing 1800MHz band, and now the carrier's testing a three-band approach that leverages another 15MHz, boosting top download speeds to 400 Mbps.

The new trials are taking place in Wembley Stadium, where EE is creating the world's most connected stadium. Delivering these speeds is a first for both the UK and Europe, though customers won't be able to fully utilise such a network until Cat 9 smartphones enter the market next year. It might sound like a way off, but EE is determined to stay ahead of the competition. Only Cat 9 devices can aggregate all three bands, but older smartphones will still benefit from the new spectrum. It should ease the burden on each individual band, meaning your smartphone is more likely to hit its maximum download speed.

To show off its 400 Mbps network, EE has set up a digital art installation inside the stadium. In a dimly lit room, 25 Samsung Galaxy S5 smartphones are suspended in mid-air, with six 4K TVs hung vertically behind them. A Kinect sensor looms overhead, tracking your body as you approach the wall of screens. Walk forward and you'll hear some of Mr. Brightside (yes, that track) by The Killers and see a few smartphones spring to life with pixellated videos. Move even closer and the entire experience hits a crescendo, showing different viewpoints of a concert originally performed inside the stadium. Moving from side-to-side introduces the roar of the crowd and crystal-clear shots of the stage.

All of the content is being streamed from an external server over EE's 4G network. As you move closer to the installation, the quality and quantity of the recordings increase, placing additional strain on EE's reinforced infrastructure. The carrier says its network is "effectively maxed out" once all of the screens and recordings are activated, but it never appears to buckle under the pressure. The purpose of the unusual demo is to highlight how EE's network will be able to cope with the evolving demands of its customers, even in an area like Wembley Stadium where up to 90,000 spectators could be accessing the internet simultaneously. Glance at the monitor in the back of the room and, as promised, you can see an independent speed test clocking a fairly stable 400 Mbps connection. The installation is a bit of a gimmick, but the network technology underpinning it all is the real deal. EE is running the trial in a specific part of the stadium, but the plan is to expand coverage across the entire venue. An LTE-A upgrade in March will get the ball rolling, and it's hoped the three-band setup with 400 Mbps max download speeds will be live within the next year. Wembley Stadium is only a tiny part of the UK, but these tests highlight EE's willingness to invest in infrastructure. It might not advertise when the new speeds are available, but it hopes that over time, subscribers picking up Cat 6 and Cat 9 devices will notice the network getting faster and more stable throughout the UK.

In this article: 4g, 4glte, ee, lte, lte-a, lte-advanced, mobilepostcross, uk-feature
All products recommended by Engadget are selected by our editorial team, independent of our parent company. Some of our stories include affiliate links. If you buy something through one of these links, we may earn an affiliate commission.