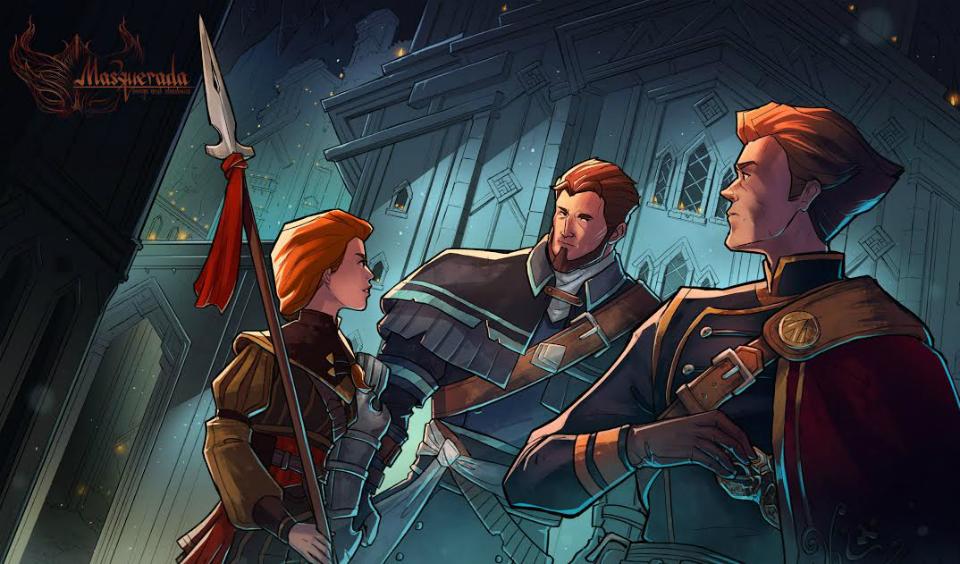 In Masquerada: Songs and Shadows, the city of Ombre resembles a fantastical, medieval Venice: elegant stone towers are lined with heavy wood furniture and the people dress in lush fabrics, wielding swords and spears. But Ombre is not Venice; it's an entirely secular society whose citizens put no stock in the idea of an afterlife, and it's a land where powerful magic stems from a collection of rare masks. The Inspettore, Cicero Gavar, returns from exile to investigate an earth-shattering kidnapping, with the help of spells, weapons and his team -- including Kalden Azrus, a man the city considers a "deviant."

"While having the main character be gay and allowing a romance, as BioWare does, is very empowering to a gay player, we hope to serve them in another way -- to show our audience the beauty and humanity of a gay character and how it would translate to real world situations," lead developer Ian Gregory says.

Masquerada's world reflects the lives of its developers in a few ways. It comes from Witching Hour Studios, a development company in Singapore, and the world of Ombre is based on Singapore's own mutli-cultural, diverse population. The game is a "pause for tactics" RPG, meaning players can stop in the middle of battle and plan out efficient attacks. The art and mechanics are inspired by Bastion, The Banner Saga and Baldur's Gate, a collection of narrative-driven and innovative tactical titles, all sprinkled with a dash of brilliant neon color.

But, these are the surface aspects of Masquerada. Beneath the gorgeous design lies a deeper message about what it means to be human, shaped by Gregory's dissatisfaction with the portrayal of gay characters in video games.

"I'm tired that gay characters in games are portrayed [as] oversexualized," Gregory says. "While some have depth, they seem to be defined by their sexuality and not enough by their humanity. If we're gonna constantly harp on how different they are just by their bedroom habits, that's all society will latch on to. We'd like to show the perspective of a gay character whose choices and behaviors are profoundly affected by others' conflicting attitudes to their sexual orientation -- and to do so in a way where the conversation isn't about romance."

Basically, Gregory treats Masquerada's characters as full, flawed and talented people first, rather than approaching each one from the view of a single, limiting trait. Gregory's goal is to make his characters relatable and accessible without relying on stereotypes or exaggerated tropes.

"We're going to explore fear, guilt, loss, redemption," he says. "A situation where a player would take on the role of a good friend instead of a lover. Perhaps something more familiar to those of us not of the orientation."

Of course, Masquerada has to be a solid game in order for its characters -- gay or otherwise -- to have any impact on players or society at large. To that end, Gregory says Witching Hour Studios has partnered with Ysbryd Games, a publisher that provides enough funding for the developers to craft an expansive game with rich lore and no compromises. With support from Ysbryd, the full game is due out on PC and unannounced consoles in early 2016, with no need to turn to crowdfunding or other financing options.

"We're unlikely to take this to Kickstarter unless we suddenly have a need for half a million to get Daft Punk involved or something," Gregory says. For what it's worth, a Daft Punk game soundtrack would probably be awesome. Witching Hour isn't concerned about funding and the studio has a clear idea of who Masquerada's characters are -- that doesn't mean Gregory has zero worries overall.

"If we were worried about anything, it wouldn't be about the resources to make the game, but it'd be about overcoming the hurdles of visibility with our intended audience," he says. "It's not something you can plan for. It would suck to be drowned out by the next cadre of 'I Am Call of Battlefield Creed Roguelike Simulator 2016s' because we 'didn't follow trends' about what's hip these days. Exhibiting at PAX can only do so much."

It may not result in much, but Witching Hour is doing it anyway: Masquerada will be in booth 8236 at PAX East 2015, the game convention held in Boston from March 6 - 8. Fans of Bastion, The Banner Saga or fully formed characters, check it out.

Correction: A previous version of this article suggested Masquerada's main character, Cicero Gavar, was gay. That's his party member, Kalden Azrus, the man in blue in the top image. Apologies for any confusion.

In this article: gay, glbt, hdpostcross, Indie, lgbt, masquerada, masqueradasongsandshadows, sexuality, singapore, witchinghourstudios, ysbryd
All products recommended by Engadget are selected by our editorial team, independent of our parent company. Some of our stories include affiliate links. If you buy something through one of these links, we may earn an affiliate commission.