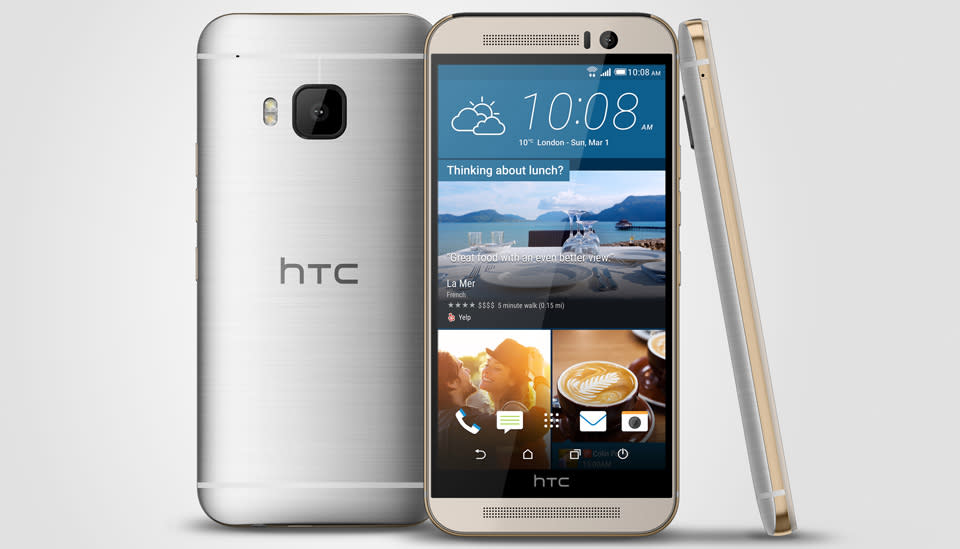 Surprise! After months of speculation and leaks, HTC is finally ready to show the world its latest flagship, the One M9. Sorry to disappoint, but those leaks were, for the most part, spot on. As they suggested, there's no major change in terms of industrial design here; the M9 looks a lot like the M8, which in turn looked a look like the original One. That means you're getting an aluminium unibody design with a 5-inch 1080p display framed at the top and bottom by HTC's trademark BoomSound speakers. Sure, it's a bit narrower, a little shorter, and a shade thicker than the M8 it replaces, but you'd be hard-pressed to tell the handsets apart at first glance. The spec sheet sees a number of incremental bumps. Qualcomm's octa-core Snapdragon 810 CPU is doing the heavy lifting here, supported by 3GB of RAM, and the M9 also sees the welcome addition of Android 5.0 Lollipop, although the presence of HTC's Sense skin means users won't see such a dramatic aesthetic change between 4.4 and 5.0. The battery capacity has also been bumped up from 2,600mAh to 2,840mAh, which, when combined with the new Snapdragon, will hopefully see the M9 last a full day with ease.

Perhaps the biggest change comes in the form of a new rear-facing camera unit. HTC called an abrupt stop to the megapixel wars with the introduction of its UltraPixel tech, which used large, less densely packed pixels that absorbed more light. That's all gone this time around, as there's now a more conventional 20-megapixel sensor set in a square camera unit at the rear of the phone. HTC is promising big things from this camera, touting its f/2.2, 27.8mm lens and, thanks to the bump in pixel count, 4K video recording. It's not abandoning UltraPixel entirely, however, as it's using that technology for its front-facing camera.

All told, the M9 looks like a good, if incremental, upgrade over its predecessors (especially if you're coming from the original HTC One). We'll get back to you with some more detailed impressions as soon as possible.

Update: We've now got a full preview of the HTC One M9 right here.

In this article: android, breaking news, google, hima, htc, htcone, htconem9, onem9, sense, smartphone
All products recommended by Engadget are selected by our editorial team, independent of our parent company. Some of our stories include affiliate links. If you buy something through one of these links, we may earn an affiliate commission.