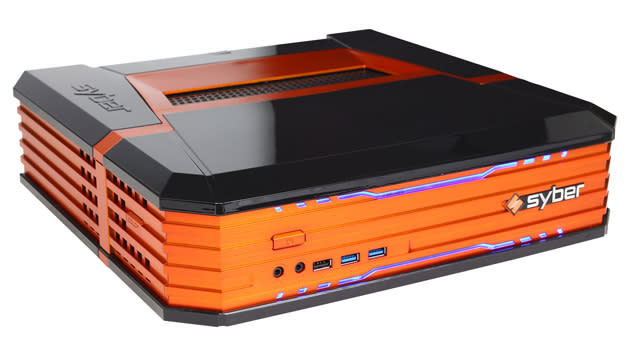 CyberPowerPC's original Steam Machine plans didn't amount to much (the company ultimately turned them into Windows boxes), but it's back again for another round. Its recently established Syber division has revealed that it will launch no less than six SteamOS computers this fall. The system builder isn't saying much about its new living room gaming rigs at the moment, but it'll give Game Developers Conference guests a sneak peek at three systems: the Mini, Mercury and Switch.

Whatever happens, this year's roster will be cheaper. The starting Steam Machine-E will cost $449 (down from last year's promised $499) with an entry-level AMD quad-core chip and unnamed NVIDIA graphics, while the $549 Steam Machine-P will kick that up to a 3.2GHz Intel Pentium and AMD Radeon R9 270X video. Performance-minded players will want to look at the Steam Machine-K, which touts a 3.5GHz Core i5 and NVIDIA's GeForce GTX 970 for $999, and there's even a special, eye-searing orange Steam Machine-X at $1,399. That's a lot to spend on hardware that will likely be a bit behind the curve by the fall, but it's good to see at least one notable PC maker that hasn't had second thoughts about backing Valve's TV gaming efforts.

In this article: computer, cyberpower, cyberpowerpc, desktop, games, gaming, gdc, gdc2015, hdpostcross, htpc, pc, steammachine, steamos, syber
All products recommended by Engadget are selected by our editorial team, independent of our parent company. Some of our stories include affiliate links. If you buy something through one of these links, we may earn an affiliate commission.