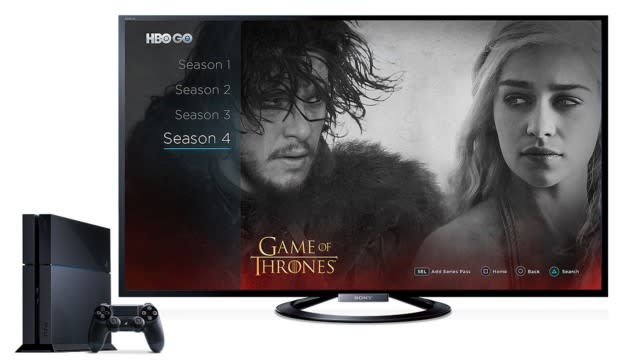 Congratulations PS4 owners / HBO Go users, your long wait is over and the app is ready for your console. It's been over a year since HBO and Sony announced it was coming to the PlayStation 3 and 4, and one day shy of a year since it arrived on PS3. That wait apparently wasn't long enough for everyone though, as Comcast is the lone provider that won't let its subscribers log in via the new app. Otherwise, system owners can download the app today and activate it online, all with plenty of time to catch up before the next season of Game of Thrones hits, or HBO opens up its non-cable subscription options. HBO and Comcast aren't entirely out of sync though, as HBO and Cinemax's live channels came to the Xfinity TV Go streaming apps today, and in other premium channel news Dish Network customers have access to Showtime Anytime.

In this article: comcast, HBO, HBOGo, hdpostcross, playstation4, PS4, sony, streaming, TimeWarner, video
All products recommended by Engadget are selected by our editorial team, independent of our parent company. Some of our stories include affiliate links. If you buy something through one of these links, we may earn an affiliate commission.