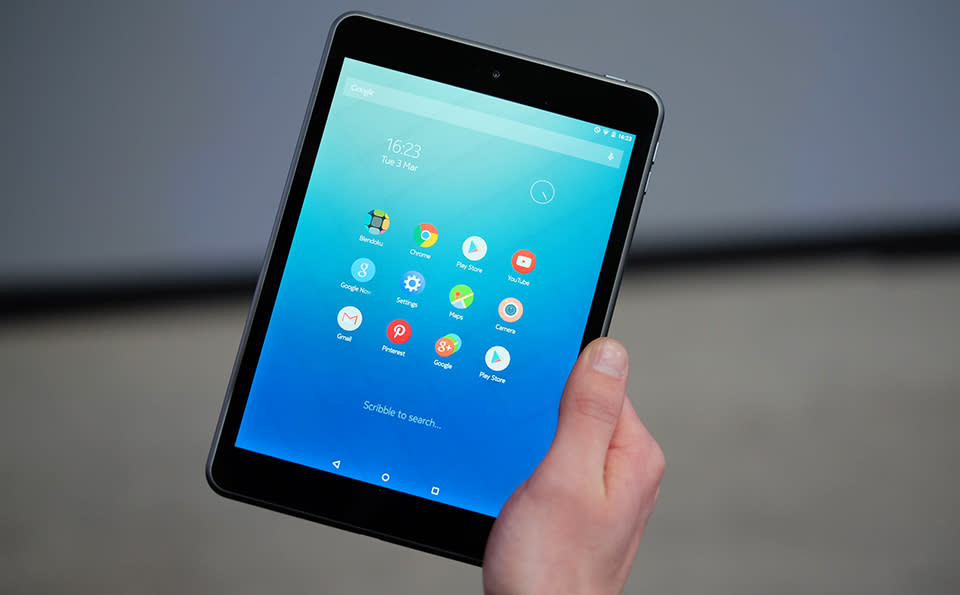 The Nokia N1 tablet has quite a few people excited here at Mobile World Congress. If you're unfamiliar with Nokia's return to devices, it's a very familiar-looking Android tablet that you could buy today if you lived in China for just $250. This is the first time we've had the chance to play with one, and it's actually quite impressive. Let's get this out of the way: The N1 looks extremely similar to the iPad mini. Viewed from the front, the resemblance is worrying, but from the back and sides it's shocking. And those press shots don't help much either. Sure, Nokia diehards can point to the all-aluminum N8 clearing the path for today's unibody designs, but everything about this feels like an Android iPad mini. The other thing you need to know about the N1 is it's not actually made by Nokia -- it's a Foxconn device. Nokia has licensed its brand to the Taiwanese manufacturing giant, we assume because Foxconn believes the brand still has some clout in China. It's also running Nokia's Z Android launcher, which is available in beta form in the Play Store if you want to try it on your device.

The N1 feels pretty premium, but it's not quite at the build-quality level of the iPad mini it apes. The fully laminated 7.9-inch 2,048 x 1,536 display looks great, it's super thin (6.9mm) and at 318g, it's actually a little lighter than the mini. Design-wise, the rounded edges bulge out more than the mini's, and in place of a Lightning port there's a shiny new USB Type-C reversible connector. It's powered by a 2.3GHz Atom processor with 2GB of RAM and 32GB of storage. Things were generally smooth in apps, but Nokia's custom launcher is very much still a work in progress and has the occasional dropped frame of animation or stutter.

About that Z Launcher -- it's actually a pretty interesting concept, and this is by far the most stable incarnation we've seen to date. The elevator pitch is the software learns what apps you use and when. Let's say you use your tablet at your nine-to-five to keep up with emails and edit documents. During those hours, when you power on the tablet it'll show you Gmail, Word, Excel and the other apps you regularly use. Maybe at night you're all about Twitter and Netflix, and after hours those are the apps you'll see.

Nokia says after a few weeks of regular use, you'll hardly ever have to tap on the screen more than once to get to where you want to be. If the app you want isn't immediately displayed, though, you do have a couple of additional options. You can draw out, say, an "e" on the screen to get a list of all apps starting with that letter, or if you're feeling less adventurous, you can swipe in from one side to get a full A-Z list. And that's pretty much it for the Z Launcher -- there's literally nothing else to it. If its adaptive behavior works as well as claimed, and Nokia can get it stable and out of beta, it's a compelling vision for any tablet.

I can't really tell you if you should or shouldn't buy an N1 -- first because I've only had 20 minutes or so with it, and second because it's not available outside of China. Nokia's not ready to announce availability elsewhere, but does say it's looking to release the N1 in other markets this year.

In this article: android, mwc2015, n1, nokia, Nokia N1, nokian1
All products recommended by Engadget are selected by our editorial team, independent of our parent company. Some of our stories include affiliate links. If you buy something through one of these links, we may earn an affiliate commission.