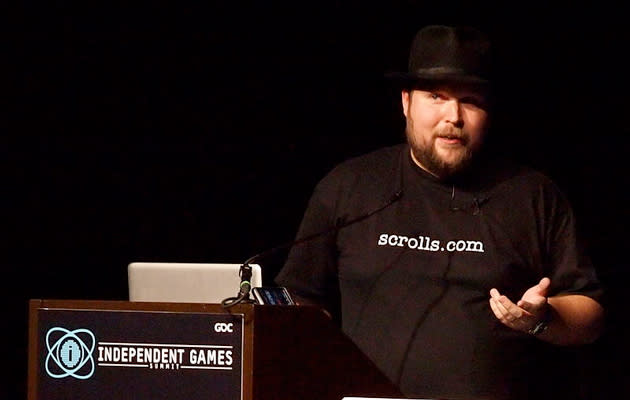 We're only halfway through the decade, but it's already obvious that Minecraft is the biggest game of the '10s. Its creator, Markus "Notch" Persson has now been honored for his achievement with a cover story in Forbes. The piece reveals a few interesting tidbits about how he came to leave the game that made his name, including the fact that the $2.5 billion sale to Microsoft was prompted with a single tweet.

On June 6th, 2014, Persson was feeling exhausted with dealing with the Minecraft community, and ventured onto Twitter to release the tension. He asked if anyone would be interested in buying his share of Mojang so that he could "move on with [his] life." According to the interview, it was mere minutes afterward that Mojang CEO Carl Manneh was being called by a Microsoft executive asking if Persson was serious. Other companies were bidding for control of Minecraft, including Activision Blizzard and Electronic Arts, although talks with the latter stalled because Persson, apparently, isn't a fan of EA's policies.

Anyone want to buy my share of Mojang so I can move on with my life? Getting hate for trying to do the right thing is not my gig.

Unfortunately, Persson was less happy with the way his post-Minecraft life has been portrayed by the piece. There is a suggestion that he now spends his days running up $180,000 bar bills at Swedish nightclubs.It's something he has denied, again, using his favorite medium of Twitter. In a series of messages earlier this morning, he said that he isn't "dedicated to partying his life away," and it would be difficult anyway, since the interest payments on his $1.5 billion fortune are going up faster than he could spend it on fancy vodka.

Swedish newspapers copy and paste from the Forbes thing, with the headline "I'm dedicated to partying my money away". Oh lordy.

There are good journalists out there, presumably. But a lot of them don't give a flying duck about the truth, they just wanna sell copies.

Also, and this sounds like bragging, but I'd have to party REALLY DUCKING HARD to keep up with the interest, so it's not a viable option.

In this article: Markus, MarkusPersson, microsoft, Minecraft, Notch, Persson
All products recommended by Engadget are selected by our editorial team, independent of our parent company. Some of our stories include affiliate links. If you buy something through one of these links, we may earn an affiliate commission.