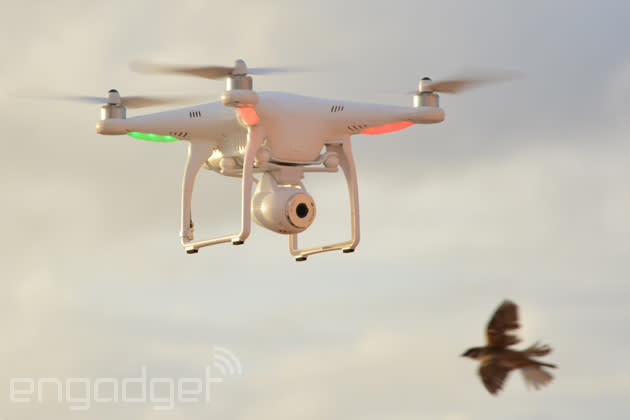 Ever since a drunk intelligence officer crashed a drone on the White House lawn, questions have been raised about their safety and how such "accidents" can be avoided in the future. Drone makers have already introduced measures to restrict drone flights in certain areas, but over in Europe, the House of Lords EU Committee has laid out a new set of guidelines that, if implemented, could make drone use safer for all involved.

One suggestion is for drone pilots to be added to an online database or app. Initially, it would cover business or professional use, but would extend to all owners in time. "Public understanding of how to use drones safely may not keep pace with people's appetite to fly them," says Committee chairman Baroness O'Cathain says. "It would just take one disastrous accident to destroy public confidence and set the whole industry back." The creation of a database would also help authorities manage the number of drones in European airspace, while ensuring those who pilot them are easily identifiable.

The Committee calls for a new manufacturing standard or "kite mark" that would provide a way for consumers to know if a drone has been deemed safe to fly. Like in the US, it also called for more geo-fencing controls, so that aircraft can't be flown in private or dangerous areas, and the creation of new guidelines for the police, so they are able to better enforce public and private drone flights.

In the UK, drones are currently regulated by the UK's Civil Aviation Authority (CAA). It already has a set of rules in place for drone use, including weight restrictions on vehicles, restrictions on where they can be flown and what should be done if they're used for filming. Right now, the number of drone owners is still pretty small, but as prices come down and more features are added, there will be a need for tighter controls to save us from anarchy in the skies.

In this article: drone, drones, eu, europe, house of lords, uk-feature
All products recommended by Engadget are selected by our editorial team, independent of our parent company. Some of our stories include affiliate links. If you buy something through one of these links, we may earn an affiliate commission.