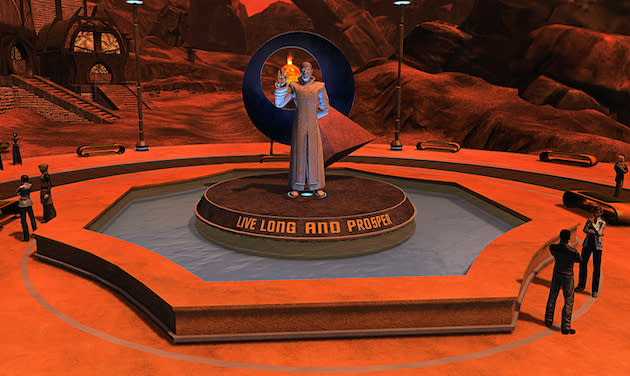 With the recent passing of Leonard Nimoy, multiple generations of geeks found themselves at a deep loss. It makes sense then that the folks behind Star Trek Online would erect effigies to immortalize the man perhaps best known for his role as Mr. Spock in the Star Trek universe. Should you travel to the planet Vulcan (Spock's home world), New Romulus, or even Earth in the game, you'll see memorials for him. The former two have statues with different quotes ("Live long and prosper" on Vulcan, "The needs of the many outweigh the needs of the few" on New Romulus), while our home planet is hanging black flags of mourning at its spaceport for the next week.

What's more, STO developer Cryptic Studios has adorned the same locations with plaques honoring the actors that've embodied other Starfleet recruits including DeForest Kelley, James Doohan, Majell Barrett and series creator Gene Rodenberry. If it sounds similar to Robin Williams' immortalization in World of Warcraft, well, that's because it is and frankly we're happy to see it happen. No snarky closer here folks, it's a bit too soon for that.

In this article: gaming, hd, hdpostcross, LeonardNimoy, livelongandprosper, memorial, mmo, PcGaming, spock, StarTrek, StarTrekOnline, vulcan
All products recommended by Engadget are selected by our editorial team, independent of our parent company. Some of our stories include affiliate links. If you buy something through one of these links, we may earn an affiliate commission.