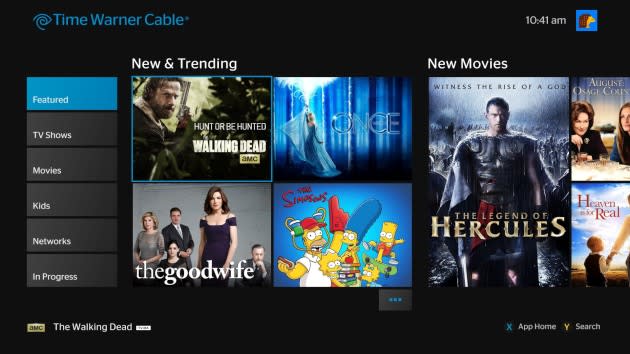 Good news: the TWC TV app is available for the cable company's customers (at least until/unless Comcast swallows it up) to watch TV on their Xbox One. Bad news: For now at least, it's limited to video on-demand only and not live TV -- weird, since it's there for the Xbox 360 version -- so it's not quite ready for you to ditch the cable box entirely. There is of course, always the option of using the HDMI passthrough, but it'd be nice to see full features, and according to Multichannel News Time Warner Cable is working on that. It does support stuff like Kinect voice controls and Snap multitasking, and promises both free and paid options among its content, so if you have the cable company's service plus one of Microsoft's current gen consoles, you should try it out.

5
In this article: app, cable, hdpostcross, microsoft, time warner cable, TVEverywhere, TWCTV, video, vod, XboxOne
All products recommended by Engadget are selected by our editorial team, independent of our parent company. Some of our stories include affiliate links. If you buy something through one of these links, we may earn an affiliate commission.