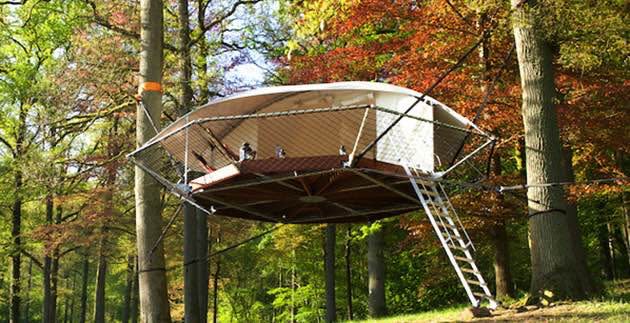 The big news out of Silicon Valley this week is that architecture heavyweights BIG and Heatherwick Studio will be collaborating to design Google's new Mountain View headquarters. Following the announcement, Google published a video providing a sneak peek at renderings and models of the forthcoming Googleplex. In other green architecture news, UC Berkeley just unveiled the world's largest building 3D-printed from powdered cement. The "Bloom" pavilion is made of 840 printed bricks, and it glows like a lantern when it's lit from within. Rüdiger Lainer just announced plans to build the world's tallest wooden skyscraper in Vienna. About three quarters of the 24-story tower will be made from wood, saving 2,800 metric tons of CO2 emissions.

Belatchew Labs Architecture has drawn up plans for one of the most innovative and environmentally friendly skyscrapers the world has ever seen. The Strawscraper is covered with thousands of rods that look like hairs from a distance, and that can harness energy from the wind. The experimental studio has also developed plans for a 3D-printed student housing development that would float off the coast of Stockholm. Speaking of floating buildings, this week EcoFloLife unveiled the WaterNest -- a solar-powered home that is 98 percent recyclable. Dutch arboriculturist Bruno de Grunne and architect Nicolas d'Ursel have teamed up to design flying saucer-shaped tree tents that leave no trace on the surrounding environment. And housing officials in Egypt recently announced plans to build a 650-foot-tall skyscraper shaped like a giant pyramid. The tower will be the tallest in the nation.

In climate news, earlier this month documents proved that leading climate change denier Wei-Hock Soon was paid $1.2 million by fossil fuel companies to lie about global warming -- and now it looks like Soon's financial backers are abandoning him. Is it possible for a city to have too many bicycles? Amsterdam, one of the world's most bike-friendly cities, is running out of space for bike parking. To make room for the roughly 880,000 bikes that travel along its streets every day, the Dutch city is planning to create 40,000 new bike parking spaces by 2030. In other green transportation news, Aston Martin just unveiled concept designs for the company's first all-electric sports car. The DBX Concept, which was revealed at the Geneva Motor Show, will feature in-wheel electric motors powered by lithium-sulfur cells. Also at Geneva, Koenigsegg unveiled its Regera supercar, the world's fastest hybrid. The powerful car can blast from 0-249 MPH in under 20 seconds.

Smartphones have brought myriad changes to our modern world, but there's only one problem: They need to be charged. In an effort to simplify your mobile life, IKEA just announced a new line of lamps that can wirelessly charge your cellphone. And if you need to charge your mobile devices when you're on the go, Project Solaire has designed a new line of simple and rugged solar-powered backpacks. On the design and innovation front, a student at London's Royal College of Art has created a faucet that uses less water than traditional faucets by emitting water in a variety of swirling patterns. It will still be several weeks before the leaves start budding on trees throughout much of the northern hemisphere, but eco artist Sarah Turner recently brought one bare tree back to life in Nottingham. Turner decorated a magnolia tree with thousands of handmade LED plastic bottle blooms for the city's annual Light Night event. California's Legoland resort just unveiled a massive model of the Death Star that is made from over 500,000 Lego bricks. The new exhibition is also equipped with a planet-destroying super laser (also made from Lego bricks). Finally, a team of archaeologists has discovered an ancient lost city deep in the rainforest in Honduras, and this week Google took us to the Amazon with new Street View cams mounted on high-flying ziplines.

In this article: 3dPrinting, climate change, EcoFriendly, google, hybrid, inhabitat, InhabitatsWeekInGreen, Lego, solar
All products recommended by Engadget are selected by our editorial team, independent of our parent company. Some of our stories include affiliate links. If you buy something through one of these links, we may earn an affiliate commission.