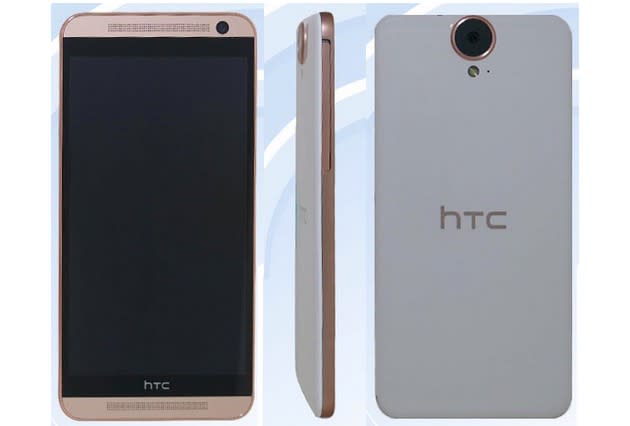 If you thought HTC's One M9 was just too small or too bulky, you'll be glad to hear that the company has something bigger in store... yes, literally. Chinese regulators recently spoiled the surprise for the One E9, a 5.5-inch cousin to the 5-inch M9 that ditches the curved metal back for a flatter (and somewhat Desire Eye-like) body. This isn't just a re-skin à la the One E8, folks. There may be big changes under the hood, too. Well-known tipster Upleaks claims that the E9 will switch from a Snapdragon 810 processor to a 64-bit octa-core MediaTek chip, and that you'll get a super-sharp Quad HD screen instead of the M9's 1080p display. A "standard" version could also ship with a regular 13-megapixel front camera, while a "high" version would carry the M9's low light friendly 4MP UltraPixel cam.

Whether or not you get the One E9 in your corner of the globe is up in the air. The E8 made it to the US through Sprint, but there's no guarantees that its successor will make the same leap. Also, it's not certain just when HTC will pull the trigger. The company recently teased more big news in mid-to-late March, but there's no guarantee that it was referring to the E9.

Update: Our sister site in China spotted the HTC One E9's specs on the same regulator's site. If accurate, the incoming model will indeed have a QHD 2,660 x 1,440 screen, an unspecified 2GHz octa-core chip (probably this MediaTek model), 3GB of RAM, 32GB memory with MicroSD support and a 20-megapixel rear camera. It'll be interesting to see how HTC markets (and prices) the One E9, which we can now see is far from a poor-man's M9.

In this article: android, china, e9, himaace, htc, htconee9, mobilepostcross, one, onee9, smartphone, tenaa
All products recommended by Engadget are selected by our editorial team, independent of our parent company. Some of our stories include affiliate links. If you buy something through one of these links, we may earn an affiliate commission.