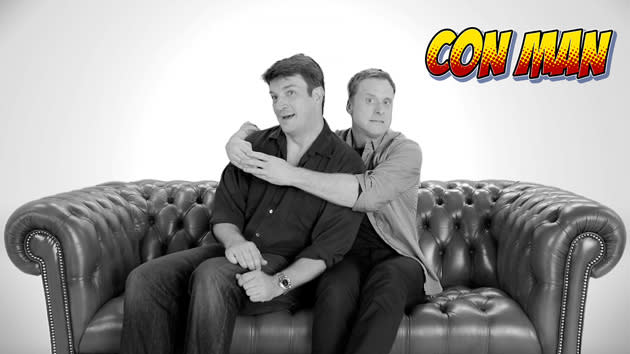 The cast of Firefly knows a thing or two about the importance of creative control (ahem, Fox), and they're taking advantage of the internet to make sure they hold the reins for their next effort together. Both Nathan Fillion (aka Mal Reynolds) and Alan Tudyk (Hoban Washburne) are crowdfunding Con Man, an online-only comedy series about a down-and-out sci-fi star learning to appreciate the convention scene -- a field that hasn't received the tribute it deserves, the actors say. Fillion and Tudyk are the main stars, but they're promising a cast that you'll probably recognize, including Firefly pals Gina Torres and Sean Maher as well as Amy Acker (Angel), Felicia Day (The Guild), James Gunn (Guardians of the Galaxy) and Seth Green (Family Guy).

The series will be a Vimeo On Demand exclusive, and the amount you pledge not only determines the perks you get (such as live video streams and props), but your access to the movie itself. Shell out $25 or more and you'll get both first crack at new episodes as well as 90 days of unfettered streaming once Con Man is available to the broader public. The project is already up to five funded episodes as we write this (with one more likely on the way), so you should have plenty to watch if and when the show makes its July release target.

In this article: alantudyk, crowdfunding, firefly, hdpostcross, indiegogo, internet, nathanfillion, streaming, video, vimeo, vimeoondemand
All products recommended by Engadget are selected by our editorial team, independent of our parent company. Some of our stories include affiliate links. If you buy something through one of these links, we may earn an affiliate commission.