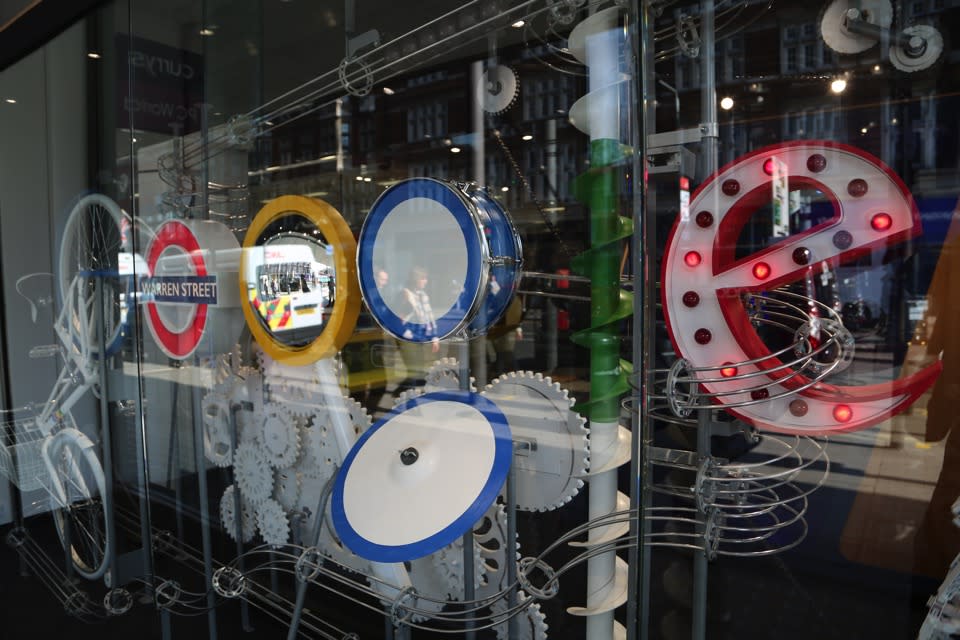 For a while now, Google has been using Currys PC World stores across the UK to promote its latest Chromebooks, Chromecast and Nexus devices. The company normally takes over a small section of the shop with its own decor, demo stations and staff, which naturally attract the attention of curious customers. Google still hasn't built an Apple-style retail store of its own, but this week it moved one step closer with the launch of a new "Google Shop" inside the Currys PC World store on London's Tottenham Court Road. The company says it's the first "Google shop experience" to be opened anywhere in the world and will be joined by two more in Fulham, London and Thurrock, Essex later this year. Before you've even stepped through the door, the scale and ambition of Google's new store is apparent. The company's huge logo dominates the window, although it's been constructed from typically British objects to give it some extra flair. A sign for the nearest tube station, Warren Street, has been used for the red "o" and a suspended bicycle represents the first lower case "g." It's bold and eye-catching, and if you wait a few moments you'll see a steel ball whizzing over, under and around all of the letters.

The store is actually quite small, but there's a lot to keep both children and adults entertained. A large "Doodle Wall" lets you create your own Google Doodle with artificial spray cans; the motion tracking is surprisingly accurate and once you've created an artistic monstrosity, you can choose to save your handiwork as an animated GIF. A second installation called "Portal" combines nine 1080p screens for an immersive Google Earth experience. A large podium houses a touch screen for easy navigation, as well as a giant "space navigator" nub that helps you pull the perspective in different directions. There's even a Leap Motion sensor so that when you land on an interesting spot, you can raise your hand and see both the co-ordinates and estimated population for the area.

A Google-blue Chromecast pod demonstrates the streaming capabilities of Google's tiny streaming dongle, while a table slap-bang in the center of the room offers a couple of Nexus 6 and Nexus 9 devices. Finally, a long demo station on the left-hand side offers a bank of Chromebooks and Android Wear smartwatches, including the Moto 360 and LG G Watch R. No Nest products though, which feels like a bit of a missed opportunity.

Before you leave, you can walk around the back of the huge Google logo in the window and push a couple of bright buttons and levers. They'll release a new steel ball or spin the bicycle wheel, and at the end you can take a photo booth-style montage with Google-themed filters and borders. Staff say the store has been designed to sell Google hardware, but it's clear this is more of a showpiece for the company. The installations are fun and memorable, but it's not like anyone needed reminding of Google Maps or the ever-changing Google Doodles. Still, "the Google Shop" is easily one of the most exciting retail projects Google has ever undertaken, and it's probably our closest look at what a permanent, standalone store from the company could look like in the future.

In this article: chrome, Currys, Currys PC World, google, Google Shop, Google Shop Experience, Google Store, london, PC World, video
All products recommended by Engadget are selected by our editorial team, independent of our parent company. Some of our stories include affiliate links. If you buy something through one of these links, we may earn an affiliate commission.