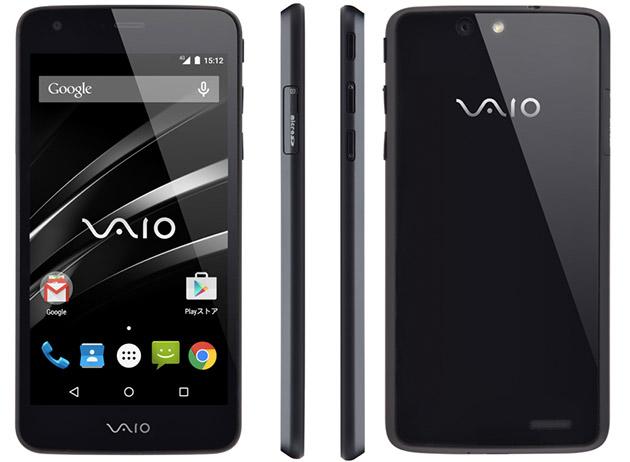 No longer a part of Sony, VAIO likes the look of that smartphone market, and has decided to go up against its former parent company's Xperia series with its own creation -- one that looks very familiar to our smartphone-seasoned eyes. It's called the VAIO Phone, and it's launching in Japan in collaboration with one of the country's smaller carriers, b-mobile, on March 20th. Remember this isn't the giant Sony we're dealing with any more: VAIO is now leaner and well, a whole lot smaller. However, it seems they put their best brains on the flagship laptop series because there's really not much to scream and shout about its first smartphone. There's five-inch display, Android 5.0, 13-megapixel camera and enough power behind the purposely unassuming shell: two gigs of RAM and 1.2GHz processor. And it all looks, well, just... okay:

There's a very flat, glossy back, curved plastic sides and it's generally very unassuming. VAIO is calling it "simple and stylish" but we interpret that as "nondescript", at least going from our early play with it. Fortunately (probably due to the smaller phone carrier involved) there's no app-based bloat, something that still lingers in Japan on its mobile phones. There's really not much more to say however: it's a smartphone. It looks like a lot of smartphones that came before it. There's no crazy camera tech, eye-bleeding screen (it's only 720p, pixel fans) or object-reading magic. But it will be priced to sell -- just shy of 33 bucks (4,000 yen) per month will get you VAIO's first smartphone as well as unlimited data. Japan residents can also pick up the phone for about $420, or 51,000 yen. Not such an easy sell.

Update: That's especially true when an all-but identical phone as already launched. As noted on Blog of mobile, Panasonic's Eluga U2, launched in Taiwan, has the same specs and looks the spitting image. Oh and it's a fraction of the price.

In this article: sony, vaio, vaiosmartphone
All products recommended by Engadget are selected by our editorial team, independent of our parent company. Some of our stories include affiliate links. If you buy something through one of these links, we may earn an affiliate commission.