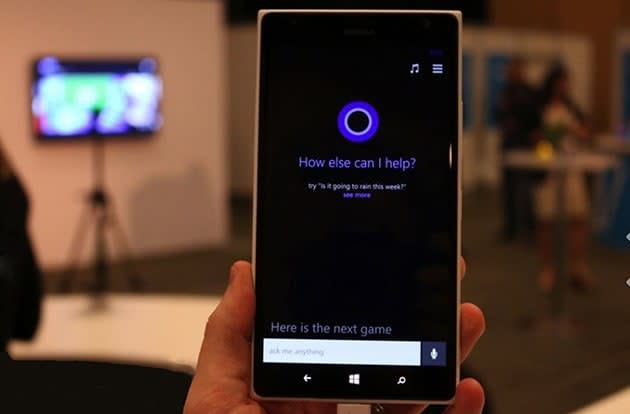 After Microsoft vaguely confirmed last November that its digital assistant Cortana will be headed to other operating systems, the software giant is finally offering up specifics. Microsoft is now aiming to bring Cortana to iOS and Android devices as a standalone app, Reuters reports. What's more, the company is also looking to include technology from one of its artificial intelligence research projects, dubbed Einstein. "This kind of technology, which can read and understand email, will play a central role in the next roll out of Cortana, which we are working on now for the fall time frame," Eric Horvitz, managing director of Microsoft Research and a member of the Einstein project, told Reuters. We've already seen Cortana offer some basic digital assistant functionality on Windows Phones and Windows 10 -- it can tell you the weather, dictate messages, and remind you of appointments -- but it sounds like it'll soon get some deeper understanding of how we live and work.

Basically, it sounds like Microsoft is turning Cortana into a more humanized version of Google Now, Google's digital assistant which anticipates your needs and surfaces information before you even ask for it, and a more capable Siri. It makes sense that Cortana would make its way to other platforms, since Microsoft is making more of an effort to bring great apps and services to other platforms. Heck, it just bought a popular email app and rebranded it as Outlook.

Microsoft is tapping into its work in machine learning, search, and speech recognition to build its smarter version of Cortana, Reuters notes. Let's just hope it's enough to make people forget about Clippy, the annoying Microsoft Office assistant infamous for its terrible predictive advice.

In this article: Cortana, digital assistants, microsoft, mobilepostcross
All products recommended by Engadget are selected by our editorial team, independent of our parent company. Some of our stories include affiliate links. If you buy something through one of these links, we may earn an affiliate commission.