Latest in Game of thrones 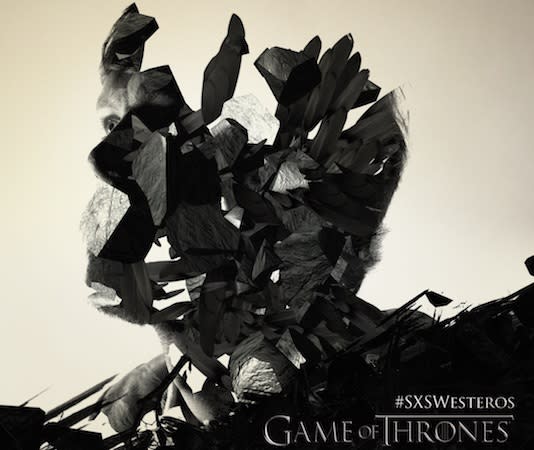 HBO has made a habit of bringing a bit of Westeros to SXSW attendees. Last year, a virtual reality experience took folks to the top of the 700-foot ice wall defended by Jon Snow and the Night's Watch. This year, Game of Thrones fans get to turn a photo of themselves into a digital collage of swords, crow feathers and stag antlers by swinging Arya Stark's wooden practice sword given to her by Syrio Forel.

How's it work? First, your photo is taken to serve as a digital canvas. Next, you proceed to a 10-foot-tall projection screen where that image is displayed, which has one of the aforementioned swords standing before it. Those swords -- crafted by the show's prop builder and identical to those used on set -- have a gyro, accelerometer and Bluetooth radio embedded inside. That hardware tracks your swings and gives you all the digital destructive power you need. Once the demo starts, you're tasked with obliterating a series of stone spheres as they appear onscreen. The resulting rock shards morph into blades, crow feathers and antlers, which accumulate to create a stylized photo like the one you see above.

Once my profile picture was in the system, I stepped on stage in front of one of three stations. Sword in hand and striking the water dancer's pose, I hacked away to my heart's content. In practice the system feels similar to playing on the Wii in that it kept up with my slashing as long as I didn't string swings together too quickly. And, of course, the sword is heavier and more unwieldy than a Wiimote. Unfortunately, my finished portrait was heavy on rock shards and had but a few feathers -- and stag antlers were nowhere to be found. Zander Brimijoin, the creative director of the project, told me that with practice, you can figure out specific sword techniques to tailor the look of the resulting portrait -- in essence turning Syrio's sword into a paintbrush. Clearly, I need more practice. Just so.

In this article: game of thrones, gameofthrones, hands-on, hbo, sxsw2015, video
All products recommended by Engadget are selected by our editorial team, independent of our parent company. Some of our stories include affiliate links. If you buy something through one of these links, we may earn an affiliate commission.