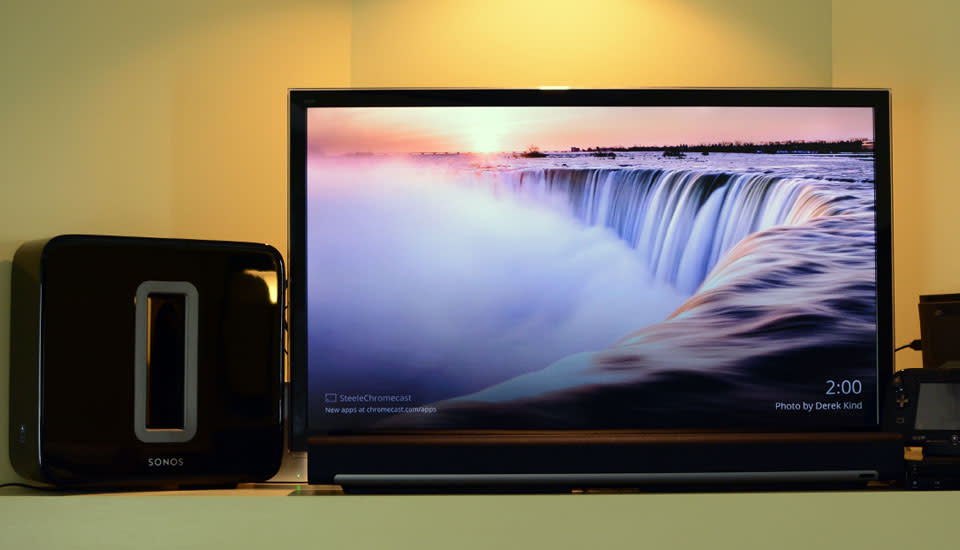 For a long time now, I've been reading (and writing) about Sonos' audio devices, filled with jealousy toward anyone who could afford to spend more than just a few minutes with them. Sure, I've briefly tried them at trade shows, but to really judge the merits of audio gear like the Playbar and Sub, you need the proper amount of soak-time. Well, I finally got my chance. Over the last two months, I've been using the basically $1,400 pair ($699 each) in my living room to handle audio from my TV and also play a little music. With an easy setup and stellar sound quality, it's easy to become smitten with Sonos. Indeed, it didn't take long before I was hooked. I knew this already, but once the Playbar and Sub arrived, reality set in: These guys take up a considerable amount of room. When dealing with home theatre tech, that probably goes without saying, but I'm mentioning it, if for no other reason than to remind you to plan ahead. The good news is that if you have a wall-mounted flat-screen, you can also mount Sonos' soundbar directly underneath. I don't, so the Playbar sat flat in front of my 42-inch Panasonic TV with the Sub on the floor just to the side. Is there a difference in performance with the two different positions? Treble projects better when mounted flat on a wall, but honestly, it sounds great either way.

Getting the pair up and running took about five minutes. It's amazing, really. If you're not into reading a page of directions, the Sonos app guides you through configuring the speakers for the first time, as well as adding new devices to your existing setup. For the Playbar, it's a matter of hooking up the optical output from your TV and plugging into a router. An update several months ago actually dropped the required Hub, so you only need to connect to your internet source for Sonos devices to work. The same goes for the Sub: Plug it into the Playbar via an Ethernet cable and you're up and running in a flash. Once the two were paired, I unplugged the Sub and it remained in sync with its audio companion, which is nice because it allowed me to easily try a few different positions to get the most bass. Inside Sonos' Controller app, you can input all of your streaming service info, or access a library of purchased music. I favor Spotify and my wife prefers Rdio, but we're able to access each other's saved tracks inside the Sonos app at any time. If she really wants to get at my "Whiskey Time" playlist via Spotify, she can with this companion software. It's really quite handy. When music is paused on a speaker, hitting the play/pause button will resume from where you left off. I currently have a Play:1 in my son's nursery so that when he heads off to sleep, we can make sure the lullaby versions of some Beatles songs are playing softly in the background -- controlled from our mobile devices, of course. Pairing all of the speakers together requires only a few taps, as does beaming different songs to different devices. Again, this gear is very easy to use.

So, how's the sound quality? It's really good. Sonos' audio gadgets, especially these two, aren't cheap, so you expect the sound (and other features) to be on point. And it really is stellar. From the car chases in Fast & Furious 6 to all of the wizardry of the Harry Potter series and the scheming of House of Cards, this set is more than capable of filling your living room with whatever you're watching on TV. It handles music like a champ, too. The Sub hits just as hard as one you'd put in your car -- if you cue up the right music. Even though it offers a load of bass for bumping Run the Jewels or Schoolboy Q, this Sonos duo lends a balanced sound to bluegrass, blues, jazz, rock and more, all with remarkable clarity. If it sounds like I'm gushing, well, I am. I'm completely sold, even with the combined $1,400 price that these two command. While the Sub and Playbar will certainly upgrade the audio in your favorite viewing area, I'd recommend splurging for a couple of Play:1 speakers to round out your surround-sound setup. And heck, when you're not using them to power through full seasons on Netflix, positioning them around the house is pretty nice, too. Sonos told me back at CES that it's committed to making sure customers don't feel like its technology ages quickly, so investing in the audio gear means added software features will help keep the gadgets feeling and sounding fresh. A welcome promise, if you ask me.

In this article: audio, engadgetirl, hdpostcross, homeentertainment, irl, playbar, sonos, sonosplaybar, sonossub, sub
All products recommended by Engadget are selected by our editorial team, independent of our parent company. Some of our stories include affiliate links. If you buy something through one of these links, we may earn an affiliate commission.