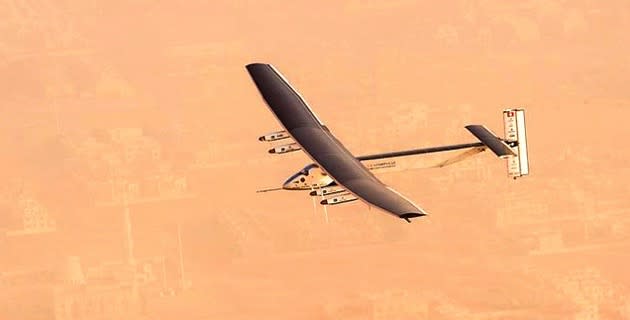 After months of preparation, a pair of Swiss aviators has embarked on the first-ever around-the-world flight in a solar-powered airplane. The Solar Impulse 2 took off from Abu Dhabi last week, and it already set a world record for the world's longest solar-powered flight when it landed in India a day later. Over the next five months, André Borschberg and Bertrand Piccard plan to make 12 stops around the globe, showing the potential solar power holds. In other renewable energy news, Goodyear announced plans to develop a heat-gathering, electricity-generating car tire at the Geneva Auto Show.

Meanwhile, Tesla has reached a major milestone by opening 2,000 superchargers that are spread out between 400 charging stations. In all, the solar-powered supercharger network has enabled more than 86 million miles of all-electric travel. Tesla is also inching closer to opening showrooms in New Jersey thanks to legislation that would overturn last year's ruling that blocked the electric automaker from selling cars in the state. Audi is gearing up to add several new electric cars to its lineup, including the R8 e-tron, the Q7 e-tron and an electric SUV with a driving range of 300 miles. And on the cycling front, a Belgium-based company is using innovative laser-cutting technology to produce completely customized bikes to fit a rider's specific dimensions.

One day after Frei Otto passed away, the celebrated German architect was named the winner of the 2015 Pritzker Prize. Otto was best known for the light and elegant tent-like canopies he designed for the 1972 Munich Olympics, and he created several low-impact, temporary structures around the world. Inhabitat rounded up seven of the Pritzker Prize laureate's most impactful designs. In other green architecture news, the world's tallest prefab tower is now complete. Chinese developer Broad Sustainable Building has just put the finishing touches on a 57-story tower in Changsha, which was built at an amazing rate of three floors per day. The world is still waiting to see if BSB can pull off the ultimate feat by building Sky City One, which would be the world's tallest skyscraper. Vertical farms are starting to take off in the US, with several new indoor-farming operations cropping up around the country. The agricultural company AeroFarms has announced plans to build the world's largest vertical farm in Newark, New Jersey. The 69,000-square-foot facility would be housed in a former steel plant, and it would create 78 new jobs. The mountain town of Jackson, Wyoming, is also set to get a new vertical farm that is estimated to produce 100,000 pounds of fresh produce per year -- a significant amount of food for the town of less than 10,000. The German city of Hamburg is debuting a one-of-a-kind design innovation: walls that discourage drunk people from urinating on them. An interest group has coated the walls of Hamburg's red light district with hydrophobic paint, which, when peed upon, causes liquid to bounce back onto the perpetrator's shoes and pants.

When Tim Cook officially announced Apple's first foray into wearable technology with the debut of the new Apple Watch last week, it was met with a big shrug by Inhabitat, which deemed it, "little more than a wearable extension of your iPhone." In other wearable tech news, Robert Downey Jr. gave a 3D-printed prosthetic Iron Man arm to a seven-year-old superhero fan, and Quell is the world's first wearable device to offer drug-free pain relief. The electronic brace stimulates your nervous system to create a natural response that blocks pain signals. The Apple Watch wasn't the only announcement Apple made last week: The company also released details of its new software platform ResearchKit, which will turn iPhones into powerful medical research tools. The open-source platform could make it easier and faster for medical innovations to come to market. Smartphones are also being used to monitor air pollution levels -- a team of Spanish researchers has found a way to use smartphones and sensor technology to monitor places where pollution is peaking. In climate news, we can't wait to check out the new film Merchants of Doubt, which exposes hack scientists, politicians and corporate shills paid by major corporations to lie about climate change. And for parents who are worried about their kids getting too much screen time, meet KIBO, a robot kit that uses building blocks to spark children's creativity instead of computer screens.

In this article: Apple, architecture, eco-friendly, EcoFriendly, Green, inhabitat, InhabitatsWeekInGreen, solar, Tesla
All products recommended by Engadget are selected by our editorial team, independent of our parent company. Some of our stories include affiliate links. If you buy something through one of these links, we may earn an affiliate commission.