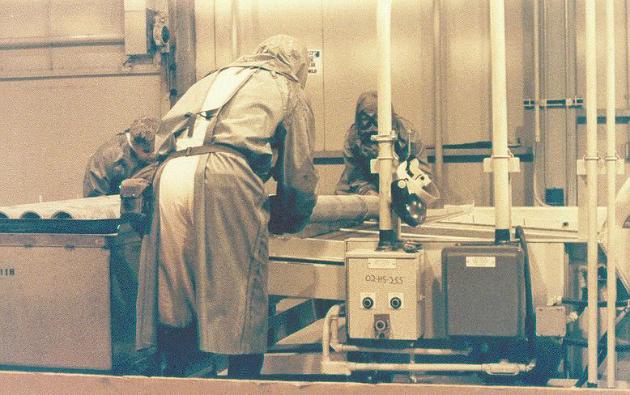 In 2013, the Syrian government agreed to destroy its stores of chemical weapons, following reports that it had dropped sarin, a torturous and lethal nerve gas, on a rebel-held town earlier that year. The 1993 Chemical Weapons Convention, signed by 190 nations (including the US and Syria), bars any country from creating, using or storing chemical weapons. Still, activists report even today attacks of chlorine gas in Syria, and chemical weapons remain a global issue. If the world can't eradicate chemical warfare completely, science will try to neutralize it: Today a team from Illinois' Northwestern University outlined the specifics of a manmade compound that inactivates nerve gas within minutes.

The goal is to mimic the effects of phosphotriesterases, natural enzymes that wipe out certain nerve gases in milliseconds -- but those enzymes are extremely fragile and degrade quickly. The compound from Northwestern, NU-1000, is a metal-organic framework, a porous mixture of metals and carbon-based links that scientists can manipulate fairly easily. This compound destroyed half of a pesticide similar to nerve agents within 15 minutes, three times faster than previous compounds. It destroyed half of GD, a nerve agent more toxic than sarin, in just three minutes, 80 times faster than previous attempts. NU-1000 isn't fast enough to use in gas masks and the natural enzyme is still up to 100,000 times faster than any manmade compound, but this is a step in the right direction, Science magazine reports.

"Recent global military events, such as the conflict and disarmament in Syria, have brought into focus the need to find effective strategies for the rapid destruction of these banned chemicals," researchers write. Their paper calls the NU-1000 results "exciting" and predicts future progress with metal-organic frameworks in the destruction of chemical agents.

In this article: chemicalagents, chemicals, ChemicalWarfare, ChemicalWeapons, military, nerveagents, NerveGas, Northwestern, sarin
All products recommended by Engadget are selected by our editorial team, independent of our parent company. Some of our stories include affiliate links. If you buy something through one of these links, we may earn an affiliate commission.