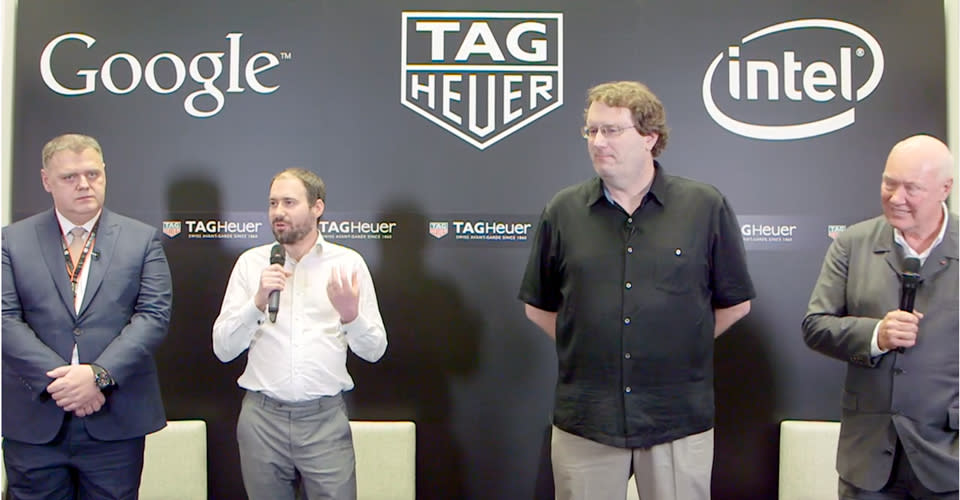 There's been plenty of speculation as to how Switzerland's watch making industry will deal with smartwatches. In Tag Heuer's case, the company has decided that if it can't beat Google, it might as well join it, which is why the firm has announced it'll be the first to produce "luxury" Android Wear devices. In addition to working with the search engine, Tag is also enlisting the services of Intel to help build the hardware that'll power this new wearable.

Jean-Claude Biver, head of watches for the luxury group LVMH -- Tag Heuer's parent company -- revealed a few choice tidbits about the decision. For instance, he told BBC News that rather than build a device that worked with iOS, or partner with Apple more generally, he preferred Google since it doesn't produce a watch of its own. There could also be some bad blood there, since Cupertino did steal former Tag sales and retail VP Patrick Pruniaux in the summer of last year. Biver also told an audience member at the event that the device would maintain Tag Heuer's house style. That falls in line with the previous Reuters report, which said that the new watch would ape the classic Carrera model.

The first watch from the partnership will arrive at the end of the year, Biver mischievously describing that as any time between October and December. The executive also revealed that the features and pricing of the watch are already known, but wouldn't be revealed until much closer to the launch date. Given that this is a Tag Heuer watch, however, we can speculate that the price will run from "a lot" all the way through to "woah."

In this article: Android, AndroidWear, google, Heuer, intel, Tag, TagHeuer, Wear
All products recommended by Engadget are selected by our editorial team, independent of our parent company. Some of our stories include affiliate links. If you buy something through one of these links, we may earn an affiliate commission.