If you want to get a sense of where the real innovation in smartphones is happening, you need to look past the high-end flagships and toward the cheap stuff. And with the new Moto E, Motorola has crafted one of the most compelling budget smartphones yet. Starting at just $150, it's a tad more expensive than last year's $120 model, but it makes up for that with upgrades that make it a far more usable phone. Those include the addition of LTE, 8GB of built-in storage (twice as much as its predecessor) and a slightly bigger screen. (Moto's also offering a $120 3G-only version.) It may not sound all that exciting if you're waiting for the new Galaxy S6 or HTC One, but it's a solid choice for someone who doesn't need a powerful phone. And it's yet another sign that even the geekiest among us may soon be springing for inexpensive, contract-free phones. 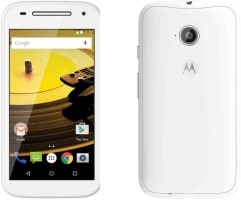 The Moto E should feel familiar to anyone who's held a Motorola phone since the Moto X debuted in 2013. Even though the company's owner has since shifted from Google to Lenovo, Motorola is still sticking with the same curved-case design, which fits oh so nicely into your hand. Sure, it's still made out of plastic, but for this price I'm not expecting a metal unibody getup. What's truly impressive is that the Moto E doesn't feel like a toy, even though it's one of the most inexpensive smartphones you can buy right now. In 2014 we were amazed that a decently capable smartphone could be cheap. This year, the big takeaway is that it actually has some style to it.

The smooth edges from last year's model, which tended to make things a bit slippery, have been replaced by ridges that help quite a bit with grip. In general, the device has a nice, solid feel, largely thanks to the lack of a removable rear panel (read: there isn't much to flex). If you want to get to your SIM card or add more storage, you just have to snap off the phone's plastic perimeter (available in several colors).

Motorola's slight screen bump to 4.5 inches, up from 4.3, makes the Moto E feel even snugger in your hand. Even more importantly, the addition of LTE makes it just as capable as more expensive phones when it comes to downloading and streaming media. Unfortunately, its screen resolution is still stuck at a relatively paltry 960 x 540 (qHD). It's once again packing a 5-megapixel camera, but there's now a 0.3 megapixel (VGA!) front-facing shooter as well. That won't be much use for taking quality selfies, but at least you've got the option for video chat now. While most of the Moto E's hardware makes a strong first impression, its display is where you begin to see the sacrifices Motorola made to reach such a low price. It's a decently bright, colorful IPS LCD screen that fares well indoors, but once you step outside it becomes a pain. The smallest amount of sunlight makes it hard to see anything on the screen. (The photo above was taken at its highest brightness on a partially cloudy day.) It's not impossible to use, but it's certainly not user-friendly. You can't blame Motorola too much, though: There simply aren't many inexpensive displays that can take on the sun well.

The other problem with the Moto E's screen is its relatively low 960 x 540 resolution, which ends up making text, photos and just about everything else a tad less sharp than on other smartphones. It's not a night-and-day difference from the 1080p displays we're used to today, but it's still a noticeable step down. I came to dread reading long articles on the phone during my subway commute, whereas that was usually the time where I put a dent in my Pocket queue. Maybe that was just an unconscious reaction to the lower specs, but it's still worth noting. If you're stepping down from a more capable display, you'll probably get used to the lower resolution, though. And it probably won't even register to people upgrading from other cheap handsets, or buying their first smartphone. No, the Moto E doesn't run stock Android 5.0.2 Lollipop -- but it's close. Sticking with a strategy it's used since the first Moto X, Motorola once again managed to deliver a phone that's mostly free of the crapware that plagues other devices. It packs in apps from Plex, Revision3 and Flixster, but those are things you may actually want to use, so I didn't find them bothersome.

The few custom Moto tweaks actually make it more appealing than a totally stock Android phone. There's Moto Display, which lights up notifications on the phone's screen when you pick it up or rock it on a flat surface. Surprisingly, Motorola even brought over the double-twist gesture, which quickly loads the camera when you flick your wrist twice while holding the phone. Just as with the Moto X, that gesture gets you to the camera at any point, including when it's still locked. Those sorts of innovations were one of the key selling points for the original Moto X, which makes it all the more impressive that they're here at all. Just like its screen, the Moto E's so-so camera capabilities won't make you forget that you're using a cheap phone. Its 5-megapixel rear shooter performs fine in daylight and bright indoor scenes, but it's pretty much useless in low light. And no, there's no flash either, if you're into that sort of thing. In decent lighting, the Moto E's camera delivered usable shots, but they were all a bit soft and lacked fine detail. There's also quite a bit of color fringing when the sun creeps into your photos. It's a camera that'll be ideal for quickly throwing photos up on Facebook or Instagram, but it won't give you any high-quality keepsakes.

I didn't spend too much time with last year's Moto E, but there seems to be a slight improvement in overall photo quality when compared to the test shots in our last review. And -- good news! -- you can finally record high-definition video. It's only 720p, but it's something.

Once again, Motorola's simplified camera software is the Moto E's saving grace. You can tap anywhere on the screen, or hit one of the volume buttons, to snap a shot. There's no need to aim for a virtual shutter button. Autofocus is just fine (it's sometimes snappier than more expensive smartphones I've tested), and the phone generally manages to take a photo in under a second. But of course, there's no fancy image stabilization here, so the quality of your photos will usually depend on how steady you can hold the Moto E. As for that wrist-flick camera gesture, I was honestly surprised at how well it worked. It typically launched the camera in just a few seconds -- yes, even when the phone was locked -- and it ended up being faster than my iPhone 6 on several occasions.

Acceptable. That's the best way to describe the Moto E's overall performance. Its 1.2GHz quad-core Snapdragon 410 processor is fine at accomplishing a single task, like navigating through YouTube and watching videos, scrolling through web pages or browsing through music on Spotify. But once you start asking the phone to do more than one thing at a time -- say, browsing Twitter while Google Play downloads and updates apps in the background -- it becomes an exercise in frustration. Everything takes way too long to load, and it almost feels like you're fighting through a veneer of molasses as you interact with the phone's touchscreen. That's especially surprising since it's packing a gig of RAM.

Even when you're not overloading the phone, the Moto E feels considerably slower than most other handsets. There's always a quarter-second delay when you're doing just about anything, be it tapping an app icon, hitting a link in Chrome or making fast gestures with your fingers. But again, this is a $150 phone! A certain amount of slowdown is acceptable for a phone in this price range. And, as with its camera deficiencies, the less discriminating smartphone shopper might not notice the issues. What's most impressive about the Moto E? It's much faster than its predecessor, and in some benchmarks it even bests the new Moto G. That raises some questions, though: Why, exactly, does it feel slower than the revamped Moto G when it has more powerful hardware? My guess is that lower-quality components, like its touchscreen, end up negating the hardware bonuses. Swiping and scrolling on the Moto G's screen feels buttery smooth, whereas the Moto E's screen feels like you're swiping through butter.

After using the Moto E for several days, its speed issues bothered me less and less. In fact, it might be the ideal for anyone who feels overwhelmed by the onslaught of digital information we face every day. It forces you to be mindful and methodical about everything you're doing. This may just be the first phone that's best suited for the Zen state of mind. If you haven't mastered your inner calm yet, though, then you might be better off with the Moto G.

One benefit of being slightly underpowered? Great battery life. I was typically left with around 25 percent of battery after a full day of use. The Moto E also managed to last around 10.5 hours on our standard battery test, which involves looping a 720p video at half of the screen's brightness until it dies. That's a huge jump over the original Moto E, which hung in there for 5:45. It also lasted more than seven hours across a slew of other battery tests, which involved browsing websites, running a bit of 3D games and playing media. The Moto E's 2,390mAh cell is a solid improvement over the previous model's 1,980mAh capacity, but it's also helped by better energy management in Android Lollipop and the Snapdragon 410 processor. For someone who doesn't use their phone very often, it may end up lasting two days on a charge.

Cheapo Android smartphones aren't hard to find, but most of them aren't devices you'd actually want to use. Sharp's $149 AQUOS Crystal is a decent option, but you can only snag it on Sprint or Boost Mobile. There are also plenty of low-end Windows Phones, like the recently announced $70 Lumia 430 and the Lumia 640, but you'd have to forgo Android's richer app ecosystem to use one of those. The Moto E, as an inexpensive phone that proves itself capable with a solid selection of features, is a rare breed. It's a significant step up from last year's model, which didn't even have LTE.

The toughest decision with the new Moto E? At $150, it's only slightly less than the $180 Moto G, which has a 5-inch screen, a significantly better camera and a far more responsive interface. I bet the new Moto E's $120 3G variant will end up being far more popular than the LTE version I tested out. If your main concern when choosing a smartphone is price, and you don't want to be locked into a lengthy carrier contract, the Moto E is a good choice. Motorola's done a fine job of bringing its curvy design and technology down to a low price point (though it'll be even more appealing when the LTE version gets a price drop). Even if it's not quite your bag, you can't deny what Motorola has done. Companies like OnePlus and Xiaomi are getting plenty of credit for making cheap phones with high-end hardware, but even those phones would be overkill for less demanding users. Motorola, on the other hand, has taken that idea even further by making the lowest of the low end something you'd actually want to buy.