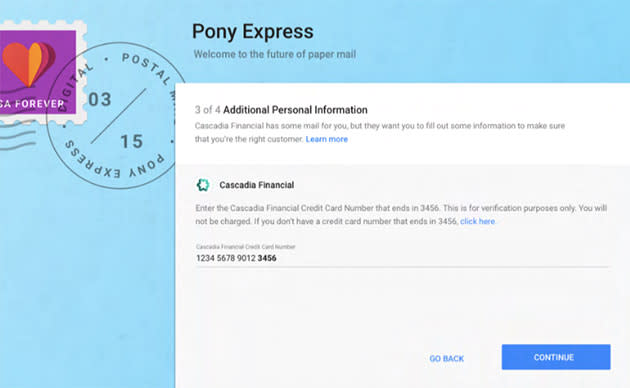 Google will remind you of some upcoming bills (if you're down with the contextual beauty that is Google Now at least), but that's not all the search giant is doing with that knowledge. According to a document obtained by Re/code, Google's working on a way for you to receive bills from your service providers in your Gmail account, and pay for them without having to leave the confines of your inbox. The service, currently code-named "Pony Express," is apparently being prepped for a launch in late (think fourth quarter) 2015.

For now, it's not clear if Google plans to work with the Verizons, State Farms and ConEds across the US... though we wouldn't be surprised if it was. Instead, it's talking with the external vendors that print up and mail bills for those companies to see about turning those physical copies into digital ones that could be routed straight to your Gmail account. Re/code's report points out that the setup process is as easy as, well, most of Google's sign-up procedures. As it stands, users would sign up with their name, home address and some sort of verification factor like your driver's license number or a credit card. Once that's all done and your digital bills start rolling in, you'll reportedly be able to pay your balance due with a connected debit card or a transfer from your bank account.

The last time Google publicly acknowledged Gmail's userbase was in mid-2012, when it said some 425 million people used the service. More recent estimates put that figure north of 500 million, so Google could stand to make some not-exactly-trivial money if it decided to charge either us users or its service provider buddies for the privilege of full-on digital mail delivery. Even if Google didn't want to monetize, the sheer amount of additional information it might have access to -- where your bills are coming from, how much they cost you, etc. -- might help flesh out the disparate picture of you Google is already putting together with your search and location histories. Valuable stuff, we're sure you'll agree.

In this article: bills, finance, gmail, google, mail, pony express, ponyexpress
All products recommended by Engadget are selected by our editorial team, independent of our parent company. Some of our stories include affiliate links. If you buy something through one of these links, we may earn an affiliate commission.