Russia's newest armored vehicle swims and picks its own shots 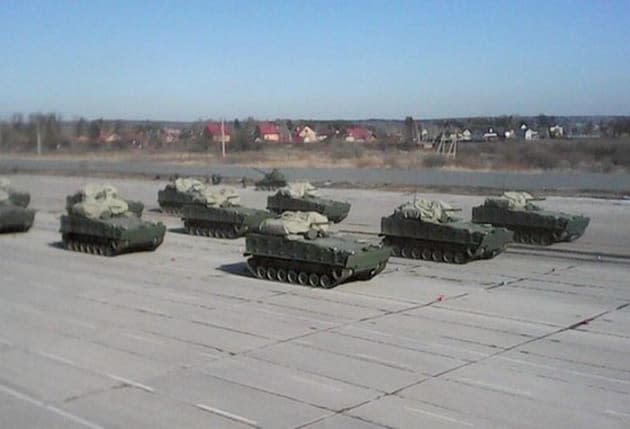 Russia's latest armored prototype was recently spotted rehearsing for the nation's upcoming May 9th Victory Day parade following more than half a decade of top-secret development. Dubbed the Kurganets BMP-25 infantry fighting vehicle (IFV), this amphibious personnel carrier has been designed to replace all of Russia's existing tracked assault vehicles, which have been in service since the Cold War.

The 25-ton Kurganets-25 will carry about a half-dozen troops and protect them with modular armor that can be adapted to meet specific mission requirements. It is armed with a 30mm cannon and a quartet of anti-tank guided missile launchers, all of which will reportedly be controlled by an onboard automatic firing system capable of choosing its own targets. The turret is remotely operated by the three-man crew.

The prototype IFC is just one of a number of potential weapons systems built off the "Armata" Universal Combat Platform, including the Armata T-14 main battle tank, a self-propelled 125-mm smoothbore gun, and various other infantry support vehicles. 25 Kurganets will participate in the parade, according to reports from Xinghua News.

In this article: armata, infantryfightingvehicle, Kurganets-25, russia, t-14, tanks, war
All products recommended by Engadget are selected by our editorial team, independent of our parent company. Some of our stories include affiliate links. If you buy something through one of these links, we may earn an affiliate commission.