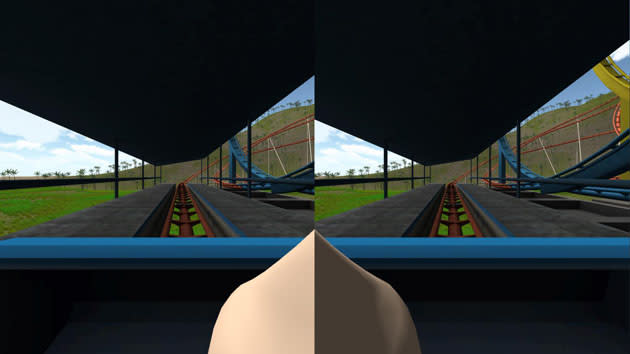 Virtual reality can be nauseating. It tricks a part of the brain into believing the body is moving, when it's not. A disconnect between the systems (somatosensory and vestibular, to be precise) can make some people want to throw up. But an ongoing study at Purdue College of Technology suggests that a virtual nose could reduce simulator sickness in video games. When your movement isn't anticipated by the body's perceptual system, it triggers motion sickness. That explains why it's usually a passenger who gets sick in a moving car and not the person driving the car.

In virtual reality, on the other hand, a part of the brain predicts movement, but your body doesn't move in sync with the visuals. "Simulator sickness is like motion sickness in its effect," David Whittinghill, assistant professor at the university and director of the Games Innovation Laboratory, told Engadget. "But it's different in its causes."

Whittinghill and his team hope to build a predictive model that will allow creators to know the amount of sickness that their visuals might induce. They noticed that there are some simulations that are easier to process than others -- games with a cockpit, for instance. They give the brain a visual reference to latch on to. As an alternative to the cockpit, Bradley Ziegler, an undergraduate student on the team, ingeniously suggested placing a nose in the VR display as a frame of reference.

"We had to hold up the Oculus headset at a distance so they could see a big honking nose."

The team took free demos available on Oculus' site –- "Tuscany Demo" and "RiftCoaster" –- and rebuilt the project files with a virtual nose positioned exactly where the user's nose would be. When tested on about 40 subjects, the experiment reduced simulator sickness by 13.5 percent. While one group had no virtual nose, the other did. Surprisingly, when the latter group was asked whether the nose was distracting, they were perplexed. "Several of them didn't believe us when we told them about the nose," says Whittinghill. "We had to hold up the Oculus headset at a distance so they could see a big honking nose."

The virtual nose is also a cheap and easy solution. "Computationally, it's not expensive," he says. "You don't have to spend effort lighting it." What's more, initial results were invariant across gender and ethnicity. The virtual nose stayed unambiguous, as planned.

Both groups tested on Oculus' DK1. It's a technology that has a lot more latency and produces more simulator sickness than it's successor, DK2. "For understanding the phenomenon, having older technology is good for us because we're studying the effects of the sickness," says Whittinghill. "It's the equivalent of studying diabetes in rats. You give the rats diabetes."

First presented at GDC last month, the team is now set for another round of tests next week before eventually replicating the virtual nose for new machines to compare results. "We can't rule out the possibility that the results we've seen, as compelling as they were, were a lucky set of observations," he says. "Good science demands that we take a second look at it."

In this article: MotionSickness, OculusRift, Purdue, Purdue University, SimulatorSickness, Virtualnose, VirtualReality, VR
All products recommended by Engadget are selected by our editorial team, independent of our parent company. Some of our stories include affiliate links. If you buy something through one of these links, we may earn an affiliate commission.