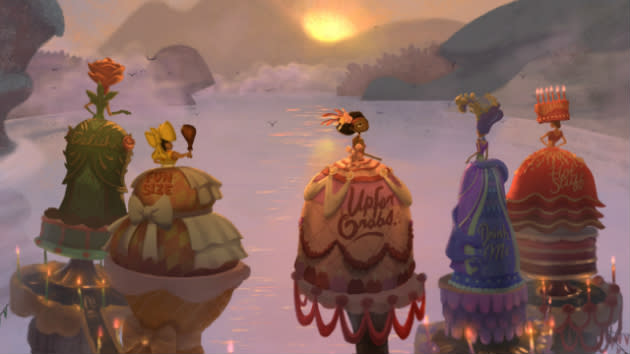 Get ready for the curtain call: The second and final act in Double Fine's Kickstarted adventure series Broken Age launches for PC in North America on April 28th (29th in Europe), IGN reports. Plus, the full game -- Acts One and Two -- will hit PlayStation 4 and Vita on those same regional dates. Broken Age Act 1 launched January 28, 2014, and we found it to be a sincere, optimistic adventure that had us yearning for more.

In case you've forgotten, Double Fine is the studio founded by Tim Schafer and some of the folks behind classic adventure games Grim Fandango and Monkey Island. In 2012 the company pulled off a legendary Kickstarter campaign for Broken Age that pulled in $3.3 million and catalyzed a golden age in video game crowdfunding.

Even with all that dough, the studio announced in 2013 that it needed additional funding, and it split Broken Age into two parts, using money earned from the release of the first act to fund development of the second. This move frustrated quite a few Double Fine fans (and Kickstarter backers), but if it's all in the name of a fresh, exciting adventure game, we're -- here it comes -- game.

In this article: broken-age, broken-age-act-2, brokenage, double-fine, DoubleFine, hdpostcross, Playstation4, ps4, SONY, STEAM, video, vita
All products recommended by Engadget are selected by our editorial team, independent of our parent company. Some of our stories include affiliate links. If you buy something through one of these links, we may earn an affiliate commission.