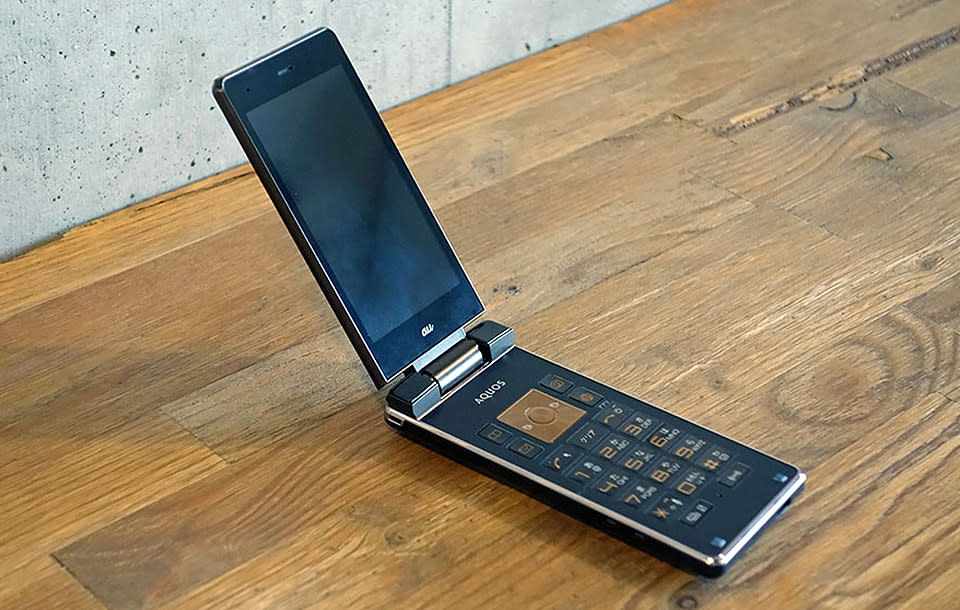 The feature phone. Still big in Japan. Still being sold in the millions. Still relevant, though? And does it even matter what a 30-something tech writer at a Western tech site thinks? Japan's large elderly population -- people who haven't even heard of Angry Birds, Gmail or Uber -- they're the ones sticking to their flip phones. Hardy, easy to use and cheaper than an iPhone. (If you need a primer on the phenomenon of gara-kei, you should probably read up on that here, but in short, it's how Japan's mobile phone market sped ahead with early technologies, then faltered when smartphone competition arrived.) So let's try using one. The best and newest feature phone available in Japan, no less. It's pitched as bringing the best smartphone features to the flip form factor. Is it better than a plain, old smartphone? Good lord, no. After picking Japanese carrier KDDI's brains about why the country was still infatuated with the feature phone, I requested the company's AQUOS K feature phone to try out. Let's start with why it's a step above existing feature phones: This handset taps into LTE, meaning not only is everything faster, but also the phone is capable of displaying the kind of internet we use on PCs (and er, smartphones and tablets too, but anyways). This also facilitates more downloading, of course, and the AQUOS K can indeed download apps... it just can't download many. There are roughly 20 to choose from, but I was hard-pressed to find many I actually wanted. I picked up a puzzle game as well as one to help me navigate Tokyo's metro, but I was left aching for the apps I open weekly, if not daily: Instagram, Tinder (don't judge), Kindle, Fitocracy, Spotify, WhatsApp, Line. Well, actually, Line messenger is here.

As the de facto messaging app for Japanese smartphone users, it's a big deal to see the genuine app on a feature phone; it's largely the same experience as my smartphone. Having said that, without a touchscreen (and the wizardry of SwiftKey), I'm stuck repetitively tapping through to the letters I want -- and spending just as much time correcting myself.

This is a user problem, however; I hand the device over to a Japanese coworker who has years of flip phone experience, and she hammers away a text message effortlessly. I guess I just need a few years of practice? Can I have my smartphone back? For the week I used the phone, it felt like a handicap. That said, there's now built-in predictive text that's notably better than what older flip phones had -- a tantalizing taste of what I (already) get on my smartphone. On the other hand, the battery life was liberating. I would typically charge the phone every three days, but I reckon I could have managed four if I were careful. "Ah, that's what I love about my old feature phone," you're probably thinking. But it's a matter of usage: I was doing much less with the AQUOS K than I would with a smartphone. It all comes back to the austere app selection. There's a 13-megapixel camera, but if it's a chore to share to Facebook (or impossible to share to Instagram), I'm just not going to use it as much.

The internet is passable, but physically speaking, navigation is slower. Regardless of the fact that it's now running on a data-friendly 4G signal, no touchscreen and a 3.4-inch display mean you'll be scrolling constantly. Without the touchscreen, the number pad doubles as a touchpad of sorts. You can zoom in on pictures and maps just like a smartphone screen, except it isn't. Unfortunately, when you want to move from a zoomed-in spot to elsewhere, you'll have to resort to the menu keys.

The AQUOS K is a pretty beautiful flip phone. Here in Japan, it comes in three color schemes, and I've gone for the professional, executive option with black, brown and bronze finishes. I feel like a high-flying Japanese salaryman when I flip it open to take calls. Flip phone fans. They... they're right: It does feel nicer to talk into them, and yes, opening and closing the dang thing feels great, too. As you'd expect from a nigh-on indestructible feature phone, it all feels solid. The rear is covered in plastic, but it has a soft, tactile finish for easy grip. There's a camera button along the left side, and a micro-USB port for charging. But it's a confusing mix of things I don't expect/don't need, while lacking things I really need. An info window that scrolls on the surface extends to show the time, battery status and notifications. However, barring an incoming call or message, you'll still have to press a button to bring the simple display to life.

When I take the phone from my desk before I go on my lunch break, I stuff my headphones into my pocket. I get outside and try to plug them in, realizing there's simply no headphone socket. I feel oddly outraged. I flip over the phone and on the back it has the FeliCa symbol, indicating it can do contactless payments. And yet -- and yet -- I can't use it as a personal music player. (That there's no Spotify is barely worth mentioning; the app isn't available in Japan.)

The AQUOS K is a feature phone with some modern bells and whistles. It's a device for people who already use feature phones and don't want to change. They probably should, but if they like their existing phones (and existing behavior) so much as to buy the same again, the AQUOS K is probably the best bet. For me, I'm not willing to downgrade my behavior for the sake of a cool flipping motion. I can't go back. You probably can't either.

In this article: AQUOSK, au, engadgetirl, flip phone, flipphone, japan, japanese, kddi, mobilepostcross, sharp, uk-feature
All products recommended by Engadget are selected by our editorial team, independent of our parent company. Some of our stories include affiliate links. If you buy something through one of these links, we may earn an affiliate commission.