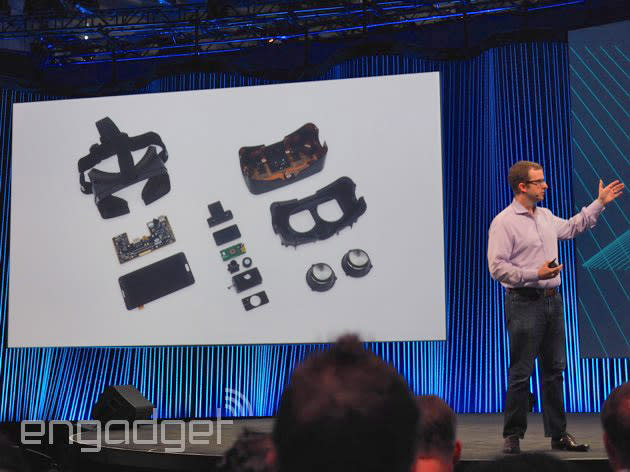 In a rather off-hand comment at today's Facebook developer's conference, company CTO Mike Schroepfer dropped a hint that the Oculus Rift VR headset could come to market this year. It was during an overview talk about what VR means for the company, where Schroepfer demonstrated a sleek looking space shooter game. Following that, he said "You're going to be able to do this, this year in VR ... and in something shipped by Oculus."

"We are just on the cusp of getting there, the sense of presence ... the sense that you are not where you stand," said Schroepfer. But Facebook's primary goal with Oculus? To bring people together. He gave the example of how we all experience this when we have a birthday on Facebook. "That's our hope of what we can do with VR; to connect the world." He adds that Facebook's goal over the next ten years is to bring everyone into these moments. "Bringing people together is the core of our mission."

Even though Oculus has been around since 2012 -- remember that it was originally a Kickstarter project -- it's yet to make its way to consumers despite multiple iterations. It's now been a little over a year since Facebook first announced that it would be buying the VR company, with many questioning the move. But it appears that Facebook's commitment to Oculus could result in a final version of the headset finally heading to retail, three years after its initial debut.

UPDATE: Facebook has informed us that Schroepfer didn't intend to hint or announce any shipping date regarding the Oculus Rift. He just meant that PC hardware available this year can create these VR experiences.

In this article: f8, facebook, oculusrift, timeline16oculusrise
All products recommended by Engadget are selected by our editorial team, independent of our parent company. Some of our stories include affiliate links. If you buy something through one of these links, we may earn an affiliate commission.