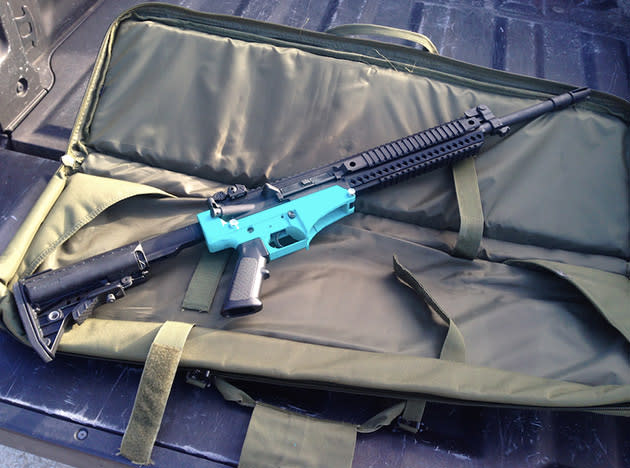 In 2013, Defense Distributed created the world's first 3D-printed handgun, the .38-caliber Liberator. The following year, they unveiled an AR-15 receiver capable of firing hundreds of 5.56mm rounds without fail. This year, designers from FOSSCAD has raised the bar yet again. They've successfully crafted and test fired the receiver for a Colt CM109 modular battle rifle -- the AR-15's badass big brother. The CM109 is larger and heavier than the AR-15 as it is built to accommodate a larger caliber round: the 7.62 x 51mm NATO. The 7.62mm rounds fly farther and strike with much more force than the 5.56mm, making them far more deadly. It also means that the lower receiver (the bit that holds the firearm's moving parts) has to be both heavier and sturdier in order to handle the increased mechanical stresses and harder recoil associated with using a bigger bullet.

Sturdiness, however, isn't typically the first thing that comes to mind when talking about 3D-printed items. The first few iterations of both the AR-15 receiver and the Liberator failed after squeezing off just a few rounds. Getting them to stand up to the rigors of repeated use has required a lot of trial and error. From the image above, the group has obviously cleared that hurdle with the CM109 components (at least for the first few seconds of rapid firing). "It has been fired with little to no issues," the group said in a statement. Reportedly, the CM109 team crafted the component using a commercially available $500 DaVinci 3D printer.

In this article: 3dPrinting, cm109, colt, firearm, guns
All products recommended by Engadget are selected by our editorial team, independent of our parent company. Some of our stories include affiliate links. If you buy something through one of these links, we may earn an affiliate commission.