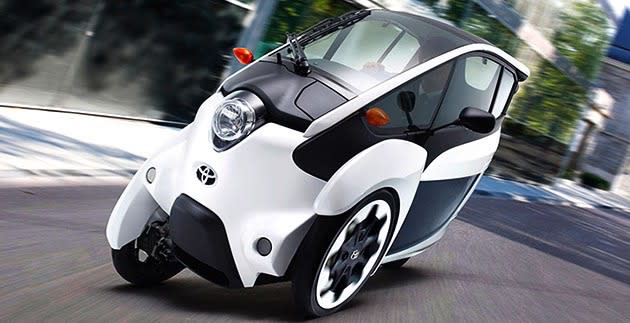 Fans of green cars are eagerly awaiting the release of the Tesla Model X, but you won't have to wait to see what it looks like on the road -- a YouTube user spotted the new car cruising down the freeway in Palo Alto, California. The electric vehicle, which was originally supposed to be released in 2013, is now set to launch in the third quarter of 2015. In other automotive news, Mercedes-Benz has announced plans to release 10 new plug-in hybrid models by 2017. The new models will be designated with a simple "e" instead of the longer "plug-in hybrid" branding. Toyota is currently testing its i-Road three-wheeled electric vehicle in France. The i-Road is seen as a "last-mile" vehicle, and Toyota wants to see how it can integrate with public transportation to decrease traffic gridlock.

In other green transportation news, a Russian oligarch has announced plans to build a massive superhighway that would connect all the continents in the Northern Hemisphere. NASA is quietly testing an electric plane concept that has the potential to shake up the aviation industry. The plane, which looks quite a bit different than today's typical commercial jet, has 18 independently operated electric motors that are powered by lithium-phosphate batteries. And for contemporary nomads, the Mogo Freedom is a versatile trailer that sleeps two and contains plenty of storage space for schlepping outdoor gear.

The Solar Decathlon is one of the biggest green architecture events of the year, and plans for this year's slate of houses are already trickling in. A team of German and American students from Munich and Austin, Texas (respectively), will build NexusHaus, a small one-story prefab that's equipped with an efficient water-treatment system and rooftop solar panels. In other design news, Spanish architects Jose Selgas and Lucia Cano of SelgasCano just unveiled designs for the 2015 Serpentine Pavilion, a temporary structure that will be built in London's Kensington Gardens. The United Nations is partnering with the social enterprise Better Shelter to deliver 10,000 solar-powered flat-pack IKEA shelters to refugee families. Irish company Thermo Tent has created a new type of insulated camping tent that maintains constant internal temperatures and muffles noise, while Heimplanet released a new inflatable tent that can fit up to six people. A father-daughter team has recreated many of the scenes from Jurassic Park using stop-motion video and over $100,000 worth of Lego bricks. And in wearable tech news, a new shoe created by iShüu Technologies is made from electronic paper that can change colors and patterns. And fashion designer Pauline van Dongen and architect Behnaz Farahi have teamed up to create a 3D-printed flexible collar that can move on its own with a little help from nitinol and a small electric signal.

Chinese officials have announced plans to shutter all of Beijing's coal-fired power plants by 2016. The city will be switching to gas-powered plants, which are significantly cleaner. Meanwhile, Europe is leading the way when it comes to dealing with climate change. France just passed a new law that will require all new commercial buildings to be at least partially covered with either solar panels or green roofs. But increases in renewable energy aren't confined to the European continent. Thanks to heavy rainfall, Costa Rica was able to run solely on renewable energy for more than 75 days. And in Uzbekistan, workers have erected an enormous solar oven that uses concentrated solar energy to produce temperatures hot enough to melt metal. New photos show the futuristic structure, which can heat up to 3,000 degrees Celsius. In other clean energy news, researchers have figured out a way to transform packing peanuts -- those little, white, foam nuggets that typically end up in the landfill -- into carbon anodes for lithium-ion batteries.

In this article: eco-friendly, Green, inhabitat, InhabitatsWeekInGreen, Lego, NASA, Shoes, Solar, Tesla, Toyota, WeekInGreen
All products recommended by Engadget are selected by our editorial team, independent of our parent company. Some of our stories include affiliate links. If you buy something through one of these links, we may earn an affiliate commission.